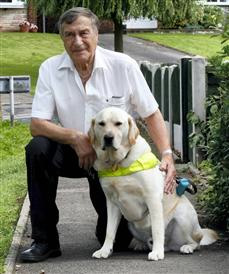 Muslims residing in the UK have never gotten proper training (i.e. stiff punishment) for mistreating blind people who have guide dogs, Pooches are unclean, according to Mohammed, so his little Islo-drones behave abominably toward the disabled when they need doggie assistance.

Refusing service to blind people with guide dogs is not only rude and barbaric, it is also illegal, as noted below, However, a more appropriate punishment would be imprisonment rather than a hand-slap fine.

The Great Haywood pensioners claim the driver did not want Blake, the current West Midlands guide dog of the year, in his cab.

This contravenes the Disability Discrimination Act (DDA) 2005 and can land offenders a £1,000 fine unless they certify they have a dog allergy.

Mrs Dix, 71, said this was the first time her golden retriever-labrador cross had been rejected from a taxi.

She said: “I can barely see, but saw the driver wave his hands and say ‘no, no, no’ as we approached his cab.

“We were both very upset and were made to feel really small, but just got the next taxi in the end. “We’re moving to Stafford soon and this is a very poor start indeed.” Eight-two-year-old Mr Dix, whose eyesight is worse than his wife’s, was “appalled” by the driver’s behaviour.

He said: “I’ve been registered blind for 28 years and have never been discriminated against by a taxi driver before this.

“If he isn’t willing to pick up certain people, then he shouldn’t be in a queue of taxis earmarked for shoppers.

“The driver we eventually used agreed it was appalling it made me feel like a second-class citizen.” Seven-year-old Blake won his award last year in recognition of loyal service to his owners.

Mrs Dix told the Newsletter how clever Blake is.

She said: “If you get off the bus and say ‘take us to the bank’, he’ll guide you straight there.

“He then knows to wait in the queue until a cashier calls you over. He’s as good as gold.” In recent years, there have been reports of Muslim drivers refusing the blind due to their doctrine’s assertion that dogs are unclean.

However, the DDA does not consider this an excuse.

Mr and Mrs Dix do not know the name of the driver or firm involved.

Wouldn’t we be better off without Muslim immigration altogether? Many dog lovers would agree, I’d wager.