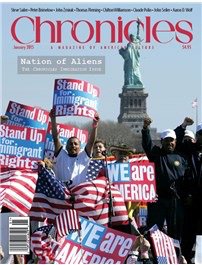 Like Steve Sailer, I have an essay in the current (January 2015) special "Nation of Aliens" immigration issue of Chronicles Magazine, and it is now available online: A Guilty Elite: Immigration Beyond Economics.

Contributors also include John Zmirak on Church, Immigration and Nation and Editor Thomas Fleming on Aliens and Strangers, both defending immigration patriotism from a Christian, specifically Catholic perspective, something we don't cover enough.

Chronicles has a long and distinguished immigration patriot record. Tom Fleming sparked perhaps the first shot in what turned out to be a brutal civil war within the late, great conservative movement with his magisterial “The Real American Dilemma,” the lead essay in Chronicles’ March 1989 “Nation of Immigrants” issue. In the November 2014 issue, VDARE.com friend Tom Piatak made the case for an immigration moratorium, one of our favorite topics.