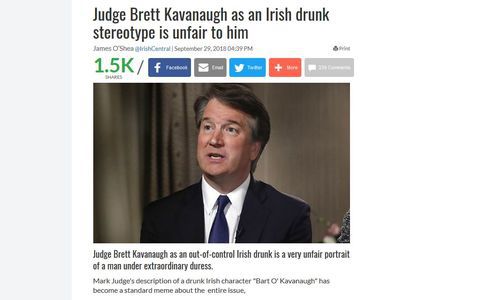 Brett Kavanaugh is quite Irish Catholic. Kavanaugh means “student of Kevin” going back to St. Kevin. His basketball coach at Georgetown Prep was Kevin Dowd, the Republican brother of New York Times columnist Maureen Dowd. (Kevin annually writes one of Maureen’s columns and is really good at it. I’m looking forward to what Kevin Dowd has to say this year.)

The Kavanaugh Kase has elicited a lot of amusing ethnic stereotyping about Irish drinking, especially from Jewish pundits, who tend to drink less and know less about drunkenness. Thus, Jewish pundits have tended to be particularly outraged by Kavanaugh’s contention that he has never drunk so much that he lost recollection.

In reality, some drunk people forget, like in The Hangover, other drunk people remember every embarrassing detail.

Stereotypes about Irish Catholic Guilt haven’t played much of a role in this story, however, because it would be inconvenient for The Narrative. Interestingly, the late Tom Wolfe’s The Bonfire of the Vanities brings up Irish Guilt in relation to the hunt for the Great White Defendant.

Three Bronx assistant District Attorneys—Ray Andriutti, Jimmy Caughey, and Larry Kramer (the indirect narrator) — discuss elected head D.A. Abe Weiss’s current obsession with the Moore case, in which an unemployed corporate executive in the nice Riverdale suburb of the Bronx shot his mother-in-law. Weiss was hoping that Moore would be a Great White Defendant, but, unfortunately, he immediately confessed:

[Caughey:] “Well, the guy’s white, he’s got some money, he lives in a big house in Riverdale. It looks at first like maybe he’s gonna fake an accidental shooting.”

[Caughey:] “Naw. Fucking guy’s one a my boys. He’s your basic Irish who made good, but he’s still a Harp. He’s drowning in remorse. You’d think he shot his own mother, he feels so fucking guilty. Right now he’d confess to anything. Bernie could sit him in front of the video camera and clean up every homicide in the Bronx for the past five years. Naw, it’s a piece a shit, but it looked good at first.”

Kramer and Andriutti contemplated this piece a shit without needing any amplification. Every assistant D.A. in the Bronx, from the youngest Italian just out of St. John’s Law School to the oldest Irish bureau chief, who would be somebody like Bernie Fitzgibbon, who was forty-two, shared Captain Ahab’s mania for the Great White Defendant. For a start, it was not pleasant to go through life telling yourself, “What I do for a living is, I pack blacks and Latins off to jail.” Kramer had been raised as a liberal. In Jewish families like his, liberalism came with the Similac and the Mott’s apple juice and the Instamatic and Daddy’s grins in the evening. And even the Italians, like Ray Andriutti, and the Irish, like Jimmy Caughey, who were not exactly burdened with liberalism by their parents, couldn’t help but be affected by the mental atmosphere of the law schools, where, for one thing, there were so many Jewish faculty members. By the time you finished law school in the New York area, it was, well … impolite! … on the ordinary social level … to go around making jokes about the yoms. It wasn’t that it was morally wrong … It was that it was in bad taste. So it made the boys uneasy, this eternal prosecution of the blacks and Latins.

Not that they weren’t guilty. …