Re: #WeAreIrish–Twitter Hashtag Reveals the Contradictions in How Liberals View Ethnicity

From Vanishing Tribes [Email him]

An interesting development in Ireland of late (well, let's say the last 3-4 years but accelerating in the last 18 months) has been the attempt to insert white identity politics from the Left into Irish political discourse. Insert them for one specific purpose, to create some kind of white privilege narrative on the model of the US and the UK.

There is a weird tension on the Left in Ireland between, on the one hand, wanting to maintain an underdog mentality around Irish identity and on the other hand, the desire to be included in the big fashionable narrative of white privilege which they see in the US. 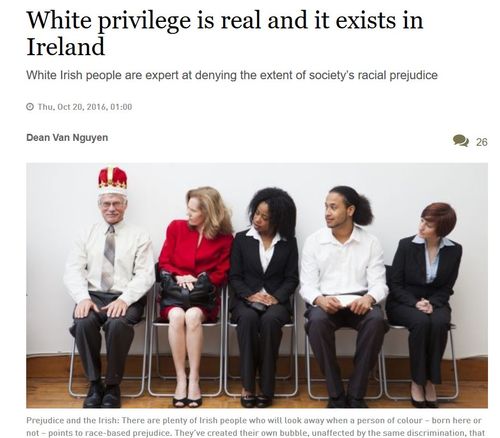 You've blogged on some of the headlines, White Privilege is real and it exists in Ireland.

And just the other day: Primary School teachers disproportionately White Irish and Catholic

Par for the course, you might say. But today Fintan O'Toole [Tweet him] (the cardboard cutout leftwing columnist) has a take that might be of more interest to you. It's in reaction to the Brett Kavanaugh investigation.

Sometimes, the eye snags on minor details like a coat-tail caught in a briar. Last week, Donald Trump’s Supreme Court nominee Brett Kavanaugh produced for the Senate judiciary committee his calendar for the summer of 1982. It records in laconic scribbles his engagements during the period when Christine Blasey Ford says he tried to rape her at a party.

Many of these notes are archetypally American, words the rest of us learned from movies about teenagers in high schools: “Grounded”, “Prom”. But for May 8th the entry says “Gaelic Football 11:00 / PROM Donny Drives”. And for May 14th, it reads” “GROUNDED GO TO ST. MICHAEL’S / Gaelic Football 3:00 / NIKKI AT BEACH”. Gaelic football, our very own little marker of Irish identity: Sweet Jesus, this snarling, hysterical, entitled man is One of Us.

The detail is minor but not incidental. It opens an aperture into a very large change in the United States, one that has crept up so gradually that it takes these moments of dissonance to make you stand back and realise how enormous it is. WASP has become WIC. The Establishment is no longer White Anglo-Saxon Protestant. It is White Irish Catholic. Some part of the identity that so many of us on this island share is now at the centre of American reactionary politics. And what we have to face that it is not the Catholic part of this that is fundamentally corrupted. It is the Irish part. [More]

It seems to me that this is a culmination of the narrative. Because here he presents the Irish so-called sense of victimhood as itself the plank of white supremacy in the Trump White House. I'm sure the article will amuse you. I'm amazed in a way that he's jumped on this angle but it's inevitable, I suppose. It's the moment where we're finally supposed to look into the abyss and see ourselves as the oppressor class.

Here is a humorous National Party tweet about it.

Next it'll be all those “White Irish Catholic” bots leaving racist remarks in the comment section. pic.twitter.com/aqfBm5NEvM