Santa Maria is a community of around 80,000 on the central California coast, with a population that was 59.7 percent Hispanic in the 2000 Census. According to local reporting, the place has the highest rate of hit-run accidents in the state.

If that statistic isn’t enough of a jaw-dropper, police say that illegal aliens are the cause of most of the hit-run smash-ups.

Police Chief Dan Macagni has responded to the public safety crisis by instituting a program of checkpoints to get unlicensed and drunk drivers off the road.

Unsurprisingly, the usual ethnic hucksters have attacked the chief’s responsible leadership as discrimination. Good policing, designed to protect the public from bad guys, is increasingly in the crosshairs in Mexifornia.

See the video report: 50 Percent of All Vehicle Crashes in Santa Maria Are Hit and Run. 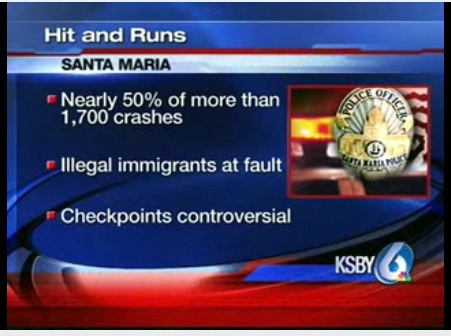 The Santa Maria Police Department tells KSBY News nearly half of the more than 1700 crashes last year were hit and runs. Police say illegal immigrants are responsible for most of them. Officers set up checkpoints in the city every two weeks to catch drunk or unlicensed drivers, but some say the checkpoints are discriminating.

Thousands of drivers in Santa Maria pass through DUI and license checkpoints twice a month throughout the city. What some call good policing others call discrimination.

“If they check in other places other than Mexican areas or Hispanic areas, you’re going to find others with suspended drivers license, with no drivers license, and all that too,” said C.C. Todd, an advocate for the Hispanic community.

Ariel: What do you say to critics who say you are targeting illegal immigrants?

“What do I say to them? Wait until they’re a victim of it and then go cry to somebody else,” said Santa Maria Police Chief Dan Macagni.

He says he doesn’t care who you are. His goal? Get unlicensed and drunk drivers off city streets.

“How about obey the rules. Obey the laws of the state of California and the United States of America,” Macagni said.

Todd also blames state lawmakers for contributing to the problem. You don’t even need a license in California to buy a car.

“The state is allowing you to get insurance, buy your car, and go register your car under your name,” Todd said. “Give them the license and you’ll see the problem will be solved.”

The checkpoints are paid for through state and federal grants–funding police fear could be slashed, driving up the number of illegal motorists who get away.

“If we’re only stopping every 4th car and we’re still impounding this amount of vehicles. It should tell you that the problem is much larger than people are seeing,” Macagni said.

Both sides feel the federal government has turned it back on the immigration issue, causing a lot of problems for communities nationwide. We wondered how the numbers affect your insurance costs. A spokesperson for State farm insurance on the Central Coast said he was not aware of the situation in Santa Maria.

Agents say anytime you have an increase in any criminal activity, expect to see costs rise.

Now, if you are involved in a hit and run, try to get the vehicle’s license plate number, which way it went and report it immediately.

12 states do not allow DUI checkpoints.