Brenda Walker: My Letter about Unemployment and Amnesty Is Printed In The WASHINGTON TIMES 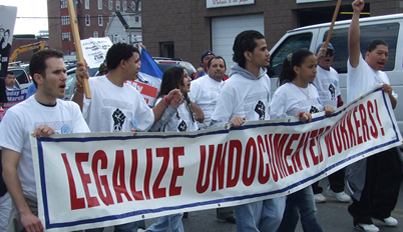 The Washington Times published my LTE on Tuesday, which was an effort to insert a little sanity into what passes for policy debate in the big capitol city these days.

The Congressional Budget Office statistics are taken from a statement by Senator Jeff Sessions.

Democrats are currently crying big crocodile tears about jobless Americans running out of emergency unemployment checks, and they’re accusing Republicans of being cruel monsters for not voting to extend the benefits. Curiously, these same Democrats vote consistently for illegal-alien amnesty, which would immediately loose millions of workers into the legal job market?, thereby increasing competition for employment. In fact, all Senate Democrats voted for the deeply flawed immigration-amnesty bill last year.

Notably, the Congressional Budget Office reported that the Senate bill would reduce average wages in America for 12 years, increase unemployment for seven years and reduce per-capita gross national product growth for more than 25 years. The Senate bill also doubles legal immigration at a time when the accumulation of immigration, outsourcing and smart machines have created a jobless economic? recovery for Americans. The automated future will require far fewer humans for manufacturing and services.

The pose of Democrats that they are the friends of the American worker is simply not credible, given their open-borders strategy aimed at creating a permanent Democrat majority of big-government voters.

America doesn’t need more imported labor now or anytime soon, owing to the effects of globalization and automation. Washington must get real about the economic realities workers face now and going forward.