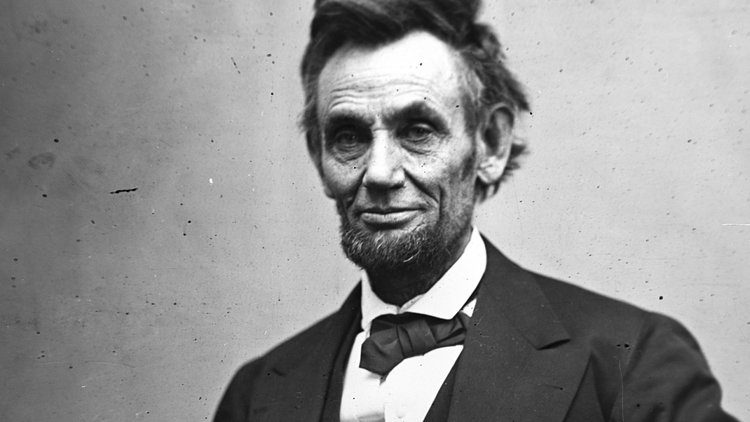 I would have liked to have seen Daniel Day-Lewis act out this White House scene.

The Executive Mansion was yesterday morning the scene of a very interesting ceremony. The Indian chiefs now in the city met the President of the United States and had a formal interview with him. ... These Indians are fine-looking men. They have all the hard and cruel lines in their faces which we might expect in savages; but they are evidently men of intelligence and force of character. They were both dignified and cordial in their manner, and listened to everything with great interest. At half-past eleven the President entered the circle, and each one of the chiefs came forward and shook him by the hand, some of them adding a sort of salaam or salutation by spreading out the hands, and some contenting themselves with a simple shake of the hand and the inevitable 'how' of the Indians of the Plains. The following is a list of the chiefs:

Mr. Commissioner Dole introduced them. The President said: 'Say to them I am very glad to see them, and if they have anything to say, it will afford me great pleasure to hear them.' ''

"You have all spoken of the strange sights you see here, among your pale-faced brethren; the very great number of people that you see; the big wigwams; the difference between our people and your own. But you have seen but a very small part of the palefaced people. You may wonder when I tell you that there are people here in this wigwam, now looking at you, who have come from other countries a great deal farther off than you have come.

"We pale-faced people think that this world is a great, round ball, and we have people here of the pale-faced family who have come almost from the other side of it to represent their nations here and conduct their friendly intercourse with us, as you now come from your part of the round ball.

Here a globe was introduced, and the President, laying his hand upon it, said: "One of our learned men will now explain to you our notions about this great ball, and show you where you live."

Professor Henry then gave the delegation a detailed and interesting explanation of the formation of the earth, showing how much of it was water and how much was land; and pointing out the countries with which we had intercourse. He also showed them the position of Washington and that of their own country, from which they had come. The President then said:

"We have people now present from all parts of the globe—here, and here, and here. There is a great difference between this palefaced people and their red brethren, both as to numbers and the way in which they live. We know not whether your own situation is best for your race, but this is what has made the difference in our way of living.

"The pale-faced people are numerous and prosperous because they cultivate the earth, produce bread, and depend upon the products of the earth rather than wild game for a subsistence. This is the chief reason of the difference; but there is another. Although we are now engaged in a great war between one another, we are not, as a race, so much disposed to fight and kill one another as our red brethren.

"You have asked for my advice. I really am not capable of advising you whether, in the providence of the Great Spirit, who is the great Father of us all, it is best for you to maintain the habits and customs of your race, or adopt a new mode of life. I can only say that I can see no way in which your race is to become as numerous and prosperous as the white race except by living as they do, by the cultivation of the earth. ..."