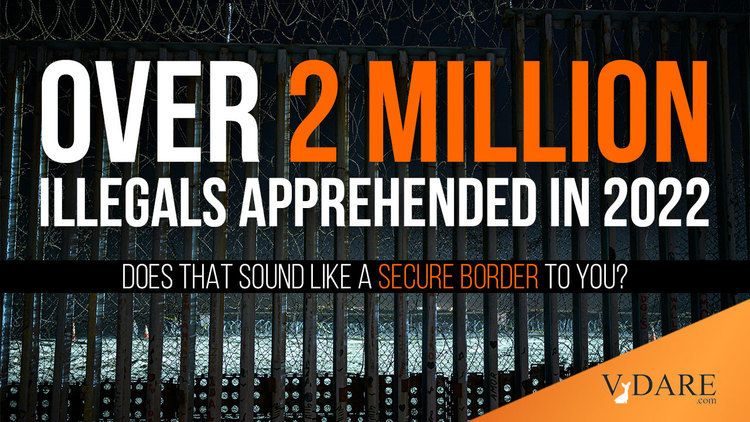 How big an impact is the ongoing Biden Border Invasion, and immigration in general, making on the U.S. population?

Breitbart ran two recent articles, on the same day, that give some hints.

A John Binder article reported that

President Joe Biden’s Department of Homeland Security (DHS) welcomed a foreign population at the United States-Mexico border in fiscal year 2022 that exceeds the populations of 15 states. As Breitbart News reported, Biden’s DHS has overseen the largest inflow of illegal immigration in a single fiscal year with more than 2.2 million border crossers and illegal aliens having arrived at the southern border from October 1, 2021, to September 20, 2022.

And what are the 15 states?

Another article published the same day reports this:

President Joe Biden’s deputies welcomed 1.66 million economic migrants across the U.S. southern border in 2022, according to data revealed late Friday [October 21] by the Department of Homeland Security. Even though the migrants entered illegally, Biden’s deputies are using a variety of legal pretexts — under Title 8 of U.S. law — to release the migrants so they can work to pay off their smuggling debts to banks and loan sharks.

And there were more:

An additional 500,000 unreported migrants sneaked across the border, according to official counts leaked to Breitbart News and other outlets.

The 500,000 additional illegal migrants pushed the total cross-border inflow to roughly 2.5 million in Biden’s second fiscal year, which started on October 1, 2021, and ended on September 30.

In addition, Biden and his deputies delivered six migrants for every 10 Americans who turned 18 in 2022.

But remember, the U.S.-Mexican border is not the only area in which immigrants are entering the country.

Biden and his deputies also welcomed many other migrants, including disaster migrants, legal immigrants, visa workers, “student” workers, and people who illegally work while pretending to be tourists. For example, Biden’s deputies legalized almost 150,000 migrants fleeing disasters in Ukraine, Afghanistan, Cameroon, and other countries during fiscal 2022. Those legal inflows add at least 1.1 million migrants.

And that would mean that

If the legal inflow is added to the border illegals, then Biden’s deputies imported 3.6 million migrants in 2022 — or 1 foreigner for every American born in 2022.

But remember, all that talk about the Great Replacement is just a conspiracy theory...