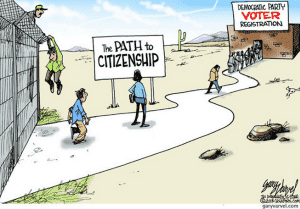 To those inured to MSM repression, a completely astonishing piece appeared on Breitbart on Friday: Cantor, Adelson, McCain, Graham—Hawks Abroad, Doves at Home? By Joel B. Pollak

The latest to insist that Cantor's loss—the first such loss in over 100 years—means nothing is casino magnate Sheldon Adelson, who is otherwise hawkish on national security.

And then goes on to say

Cantor and Adelson are joined by Sens. John McCain (R-AZ) and Lindsey Graham (R-SC) in that same policy paradox. How is it that leaders who are so rightly concerned about the threat posed by a nuclear Iran, and who back interventions abroad to protect Americans at home, seem so uninterested in the national security threat posed by a border that is so porous and poorly defended that tens of thousands of children cross illegally?

The answer is succinctly supplied by Professor Kevin MacDonald here and the mechanism discussed by myself most recently here.

Although quickly accepted into the American Nomenklatura Joel Pollak turns out to have been by origin a South African Jew. Heritage from this once politically very remarkable community has no doubt given him special insights.