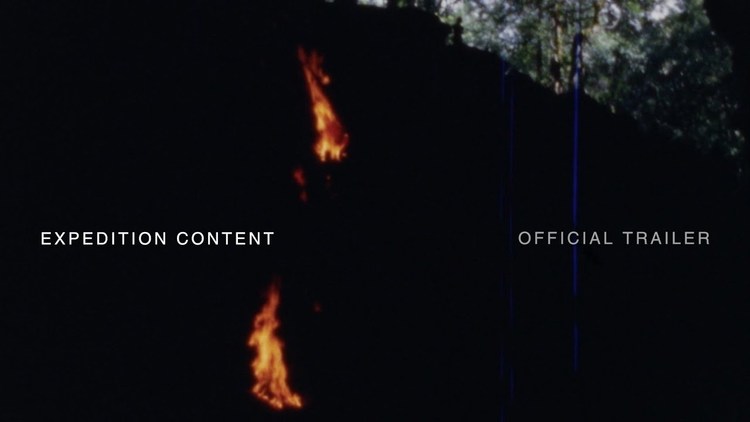 The new film Expedition Content appears to be a model for future documentaries in an age when showing video might lead to noticing (and we can’t have that). This new documentary about the making of a famous old 1963 anthropology documentary Dead Birds, about tribal warfare in New Guinea, makes the breakthrough of having almost no images. You wouldn’t want to stereotype the headhunters as looking like headhunters!

Honest to God, here’s the trailer:

From the movie review in the New York Times:

An engrossing documentary looks back at a 1961 expedition to New Guinea and the creation of the landmark ethnographic film that resulted.

“But what to do with your eyes?” — this ridiculous question popped into my head early while watching “Expedition Content,” though watching doesn’t entirely describe what I was doing. I was listening, a lot. That’s because for most of its 78 minutes, this startling and fascinating experimental documentary shows you only a black screen. Every so often, a shock of slate-y, steely blue fills the frame, followed by text. Late in the work, there is a cut to a brief scene that was shot from inside a cave. There, silhouetted figures carrying torches move about, faintly illuminated by light from the mouth of the cave.

The genesis of this project is 37 hours of audio, recorded in what was then called Netherlands New Guinea (the western half of New Guinea). The tapes were made by Michael C. Rockefeller for “Dead Birds” (1964), a milestone in ethnographic cinema directed by Robert Gardner, which focuses on the Dani (also known as the Hubula), tribal people living in the Baliem Valley.

… Among the other details listed is Michael’s disappearance and presumed death in New Guinea in late 1961. This brief family bio ends with a reference to Michael’s father, Nelson A. Rockefeller, “who ordered the police assault on the Attica prison uprising.”

The Attica detail feels like a provocation, partly because it leaves you wondering what exactly Attica has to do with a 1961 expedition across the globe or why the histories of the other participants aren’t included. Be patient! As it turns out, these snippets of text are bread crumbs that help lead you — gradually, elliptically — down the movie’s darkly lit path. …

The Dani also talk, murmur and yell, but not everything they say is translated, which is another provocation. The expedition participants speak in English and almost everything they say is understandable, at least if you speak the language. Whether this means that you, as an English speaker, are aligned or even implicated in the expedition is a question the movie presents without answering. …

The problem of translation — who speaks for whom and why — echoes through “Expedition Content,” which builds to a shattering climax during a long, boozy revel in which the expedition men joke and laugh. They’re celebrating, cutting loose. And then they start talking about jazz, and their talk grows progressively squirm-inducing, upsetting, ugly.

Apparently, the white men imitated their favorite black jazz musicians, which is the most important thing in the world: racist. It’s like blackface … in audio!

Whether the conversation serves as an indictment of Gardner’s project and, by extension, the white ethnographic gaze, is left open. I found it heartbreaking, and instructive.

After all, who cares about New Guinea headhunters? Boring. But catching white men talking about African-Americans 51 years ago is exciting! From Slant:

Expedition Content transforms visual anthropology into a work of sonic ethnography that becomes more about Gardner and his crew than the people that they’re studying. In the final, extended outtake from the production of Dead Birds, the seemingly stoned men mimic the voices of black jazz musicians. “I’ve got a flip flop floogie and a floy floy,” says one man,

after which another one goes on a riff, ending with the words, “Snow White, you black, bitch, and don’t you forget it.” The outtake lacks important context or commentary, but the implication is that these white men, so amused by their mocking of black culture, are racist.

The NYT review does not dare mention the single most famous fact about this expedition: that Michael Rockefeller, the son of sitting New York governor (and future U.S. VP) Nelson Rockefeller and great-grandson of John D. Rockefeller, almost certainly got eaten by headhunters. Of course, why would anybody be interested in learning that young Mr. Rockefeller was devoured by cannibals rather than of his connection, such as it was, to Attica?