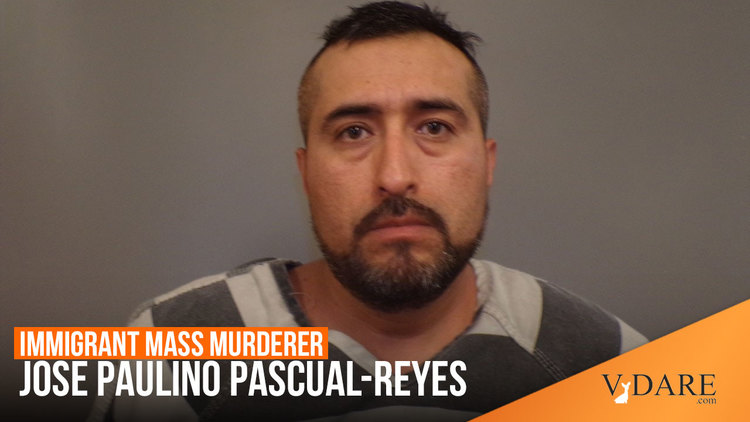 BREAKING: In Alabama, Another Case Of Immigrant Mass Murder?

A 12-year-old girl is the key witness in what appears to be another case of immigrant mass murder. After a motorist found the poor kid wandering along a road in Dadeville, Alabama, she led authorities to a home where they found two decomposing bodies. Arrested was one Jose Paulino Pascual-Reyes, 37, another of the fine Mexicans who are here to do the jobs Americans won’t do [After 12-year-old Alabama kidnapping victim chewed her way free, police found dismembered woman and child, records state, by Carol Robinson, AL.com, August 3, 2022]:

Jose Paulino Pascual-Reyes, 37, is charged with three counts of capital murder, two counts of corpse abuse and one count of kidnapping. https://t.co/StEjswEE0v

Jose Paulino Pascual-Reyes, 37, is charged with three counts of capital murder, two counts of corpse abuse and one count of kidnapping.

One of the victims has been identified through court records as Sandra Vazquez Ceja.

Charging documents against Pascual-Reyes state the little boy was fatally bludgeoned by the suspect, who used his hands and feet. The woman was smothered with a pillow.

Both victims were then “cut into small pieces at the joints in order to hide evidence,’’ according to depositions in the cases. Vazquez was killed in the course of Pascual-Reyes trying to hold her hostage.

Records state the killings happened about 12 a.m. on July 24.

The records do not indicate if the suspect knew his victims or was somehow related to them. The victims are believed to be family members of the 12-year-old girl. ...

The girl ... had been tied to a bed post for almost a week and had been given alcohol to keep her in a drugged state. During that time, she was assaulted in the head area.

The girl chewed her way out of her restraints to the point that she broke the braces on her teeth. Deputies observed marks on her wrists indicating she had been restrained.

“It was not a random abduction,” Kevin Hall, an assistant district attorney for Tallapoosa County, said in an interview on Wednesday. “As far as the nature of the relationship, I don’t think I can get into that yet.” ...

The authorities said the girl who escaped had not been reported missing. Sheriff Abbett said she was in state custody and was “doing well.” …

Sheriff Abbett said that Mr. Pascual-Reyes had worked at a construction site in Auburn, Ala., about 25 miles southeast of Dadeville, and had been living at the home since February. He added that other people were at the residence when the authorities arrived.

News stories did not clarify why authorities charged Pascual-Reyes with three counts of murder. Nor did they report his immigration status. But the Times’s Oxenden revealed that he is probably an illegal alien. He was born in Mexico, and prosecutors were expected to argue in court today that he’s a flight risk who should be denied bail.

A 12-year-old girl who escaped captivity was found walking on a road in rural Alabama on Monday. Court documents said she escaped by chewing through her restraints, and authorities said they found two decomposing bodies in the house where she was held. https://t.co/TgUtLQ7g5y