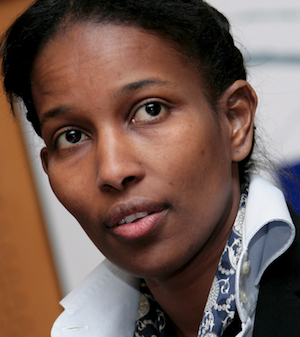 The courage to engage in diverse free expression seems increasingly battered these days, one indication being a recent faltering from Brandeis University which had arranged to award an honorary doctorate to the feminist critic of Islam, Ayaan Hirsi Ali. Apparently some squawking from the Hamas-affiliated Council on American Islamic Relations (CAIR) identifying her as (magic word alert) an Islamophobe was enough to make Brandeis shrivel up like last year’s raisins.

Sadly, the name-calling intimidation worked and Brandeis rescinded its award.

And what did Brandeis think Ali has been saying all these years? She has been unstinting in criticizing hostile Islam, particularly its Koran-approved cruelty to women. Ali was FGMed as a child and lived in Somalia when young, so she has experienced the barbarity of Islam first hand. Her partner in the misogyny-revealing documentary Submission, Theo Van Gogh, was murdered in 2004 on an Amsterdam street and she has lived with death threats since then. Ali sees Islam as being at war with the West — why wouldn’t she?

Islam defines any place not under Islamic governance as Dar al-Harb, or Territory of War, meaning that it hasn’t been conquered by Muslims yet.

(For more background on Ayaan, see my book review of her book “Infidel”, the story of her transformation from young fundie Muslim in Africa to a secular educated woman in the Netherlands, where she was eventually elected to Parliament.)

Ali was interviewed about the insult on Fox News Wednesday:

(You can watch a longer clip from the Megyn Kelly show that includes an interview with argumentative CAIR mouthpiece Doug Hooper.)

Yesterday Brandeis University decided to withdraw an honorary degree they were to confer upon me next month during their Commencement exercises. I wish to dissociate myself from the university’s statement, which implies that I was in any way consulted about this decision. On the contrary, I was completely shocked when President Frederick Lawrence called me — just a few hours before issuing a public statement — to say that such a decision had been made.

When Brandeis approached me with the offer of an honorary degree, I accepted partly because of the institution’s distinguished history; it was founded in 1948, in the wake of World War II and the Holocaust, as a co-educational, nonsectarian university at a time when many American universities still imposed rigid admission quotas on Jewish students. I assumed that Brandeis intended to honor me for my work as a defender of the rights of women against abuses that are often religious in origin. For over a decade, I have spoken out against such practices as female genital mutilation, so-called “honor killings,” and applications of Sharia Law that justify such forms of domestic abuse as wife beating or child beating. Part of my work has been to question the role of Islam in legitimizing such abhorrent practices. So I was not surprised when my usual critics, notably the Council of American-Islamic Relations (CAIR), protested against my being honored in this way.

What did surprise me was the behavior of Brandeis. Having spent many months planning for me to speak to its students at Commencement, the university yesterday announced that it could not “overlook certain of my past statements,” which it had not previously been aware of. Yet my critics have long specialized in selective quotation — lines from interviews taken out of context — designed to misrepresent me and my work. It is scarcely credible that Brandeis did not know this when they initially offered me the degree.

What was initially intended as an honor has now devolved into a moment of shaming. Yet the slur on my reputation is not the worst aspect of this episode. More deplorable is that an institution set up on the basis of religious freedom should today so deeply betray its own founding principles. The “spirit of free expression” referred to in the Brandeis statement has been stifled here, as my critics have achieved their objective of preventing me from addressing the graduating Class of 2014. Neither Brandeis nor my critics knew or even inquired as to what I might say. They simply wanted me to be silenced. I regret that very much.

Not content with a public disavowal, Brandeis has invited me “to join us on campus in the future to engage in a dialogue about these important issues.” Sadly, in words and deeds, the university has already spoken its piece. I have no wish to “engage” in such one-sided dialogue. I can only wish the Class of 2014 the best of luck — and hope that they will go forth to be better advocates for free expression and free thought than their alma mater.

I take this opportunity to thank all those who have supported me and my work on behalf of oppressed woman and girls everywhere.