The Obama Regime's amnesty plans appear to be emerging from the juvenile illegal alien fiasco emerging in Texas.  Complete amnesty appears to be the plan as the mask slips from the Regime's plans.  And juvenile gang members are the latest beneficiaries.
First: 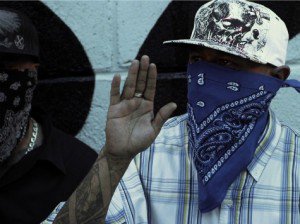 President Barack Obama's administration is knowingly allowing illegal immigrant gangsters from Mexico and Central America into the United States, and some are even being reunited with their family members.

The gang members reportedly belong to some of the most dangerous gangs in Central America and Mexico, like MS-13, but Border Patrol agents are handcuffed, especially if the illegal immigrants are deemed to be "minors."

According to National Review, Border Patrol agents who "recognize the gang-affiliated tattoos of minors crossing the border must treat them the same as anybody else." An Arizona Border Control agent said that it was upsetting that a lot of the gang members are "16 or 17 years old and a lot of them are not going to face deportation."

Chris Cabrera, the vice president of the National Border Patrol Council Local 3307 in the Rio Grande Valley told National Review that Border Patrol agents have reunited dangerous gang members with their families in the United States. He asked, “If he’s a confirmed gang member in his own country, why are we letting him in here?”

Covered from head to toe in tattoos, MS-13 gang members are easy to point out.

"They will usually have MS-13 tattooed they are usually pretty predominant with their tattoos a lot of face tattoos," said Chris Cabrera with the National Border Patrol Council.

Action 4 News confirmed through an investigation that members of the gang and others in Mexico are now sending their young recruits here.

And to the surprise of many, those that are under the age of 17 are detained and later set free on U.S. soil.

Criminal aliens appear to be a priority for the Regime, but the priority is for their release into the country.