Border Patrol Jousting With Alien Smugglers, But Not Arresting The Coyotes

How times have changed for the worse, and how little President Donald J. Trump has done about the ratchet effect of Cultural Marxist influence on immigration law enforcement.

In those training courses the newly minted immigration officers, then criminal investigators, learned about a legal concept called curtilage. Curtilage is the legal concept dealing with the issue of 4th Amendment rights. In fact, during the CITP and the IOBTC those trainees from local law enforcement agencies who transferred to Federal service were quite shocked about the curtilage principle. Why? Necause in many states, statute restricts the authority of law enforcement officers to enter into any private property. However, since the medieval period, common law has recognized that private property unassociated with a dwelling and the intimate area around that dwelling has no right to privacy or protection from entry by the King's men.

Basically, if a dwelling or open fields are not associated with the intimate activity of a household, then there is no right to protection by the need for a warrant for a Federal government official to enter. Think open fields, forests, or other land privately owned, without a home where people reside. This would include outbuildings, barns, shacks, or other structures not actual places of abode by a legally present person, e.g. not a squatter or trespasser. This means a government agent can enter into open property even if fenced or posted.

However, it appears that the United States Border Patrol (USBP) Academy or the management at the USBP have not informed their trainees and agents about the legal concept of curtilage.

A group known in Arizona for assisting illegal aliens through the desert after they cross the border forced U.S. Border Patrol agents to obtain a warrant to search for migrants in their camp. The agents later arrested four Mexican nationals.

Border Patrol agents assigned to the Tucson Sector used technology surveillance to detect four suspected illegal aliens who crossed the border along a known human smuggling route. The four individuals were wearing camouflage as they walked northward from the Mexican border, according to information provided to Breitbart Texas by U.S. Border Patrol officials...

Agents subsequently sought and obtained a warrant to search the camp and question the four suspected illegal aliens. Agents found the migrants and questioned them about their citizenship and legal right to be present in the U.S. Satisfied that the four people were illegally present in the country, agents took them into custody.

Twenty years ago the Border Patrol would not have obtained a warrant, first because no warrant is needed to detain, question, and arrest an illegal alien according to Title 8 United States Code (USC), Section 1357 (and Chapter 8 Code of Federal Regulations Section 287.5):

(a) Powers without warrant: Any officer or employee of the Service authorized under regulations prescribed by the Attorney General shall have power without warrant—

(1) to interrogate any alien or person believed to be an alien as to his right to be or to remain in the United States; 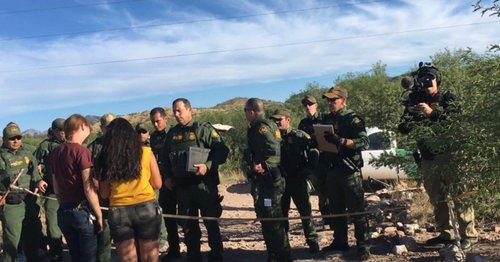 And second, no arrest warrant was needed, whether this "camp" was on public or private property:

“The Border Patrol acknowledged that they tracked a group for 18 miles, but only after the migrants sought medical treatment did the Border Patrol seek to arrest them,” No More Deaths Founder John Fife claimed.

(3) ... and within a distance of twenty-five miles from any such external boundary to have access to private lands, but not dwellings, for the purpose of patrolling the border to prevent the illegal entry of aliens into the United States;

But the real question is why the Border Patrol managers did not instruct the agents who raided the alien smuggling organization No More Deaths, coyotes in the local parlance, to arrest those who aided the illegal aliens in violation of Title 8 USC Section 1324, Bringing In and Harboring Certain Aliens, for which Border Patrol Agents are authorized to make under 8 USC 1357?

(4) to make arrests for felonies which have been committed and which are cognizable under any law of the United States regulating the admission, exclusion, expulsion, or removal of aliens, if he has reason to believe that the person so arrested is guilty of such felony and if there is likelihood of the person escaping before a warrant can be obtained for his arrest, but the person arrested shall be taken without unnecessary delay before the nearest available officer empowered to commit persons charged with offenses against the laws of the United States;

You can contract the Chief Patrol Agent, Paul Beeson, of the Tucson Sector here and ask him why he is mollycoddling alien smugglers:

Let him know that 20 years ago the USBP would not have tolerated any "sanctuary" for illegal aliens nor such groups aiding and abetting a Federal crime operating openly and flagrantly. Let him know that Attorney General Jeff Sessions has publically stated that illegal immigration will not be tolerated and will be prosecuted. Hold him to that.

Unsurprisingly the criminals at No More Deaths were unapologetic and not very bright:

For the past 13 years, No More Deaths has provided food, water, and medical care for people crossing the Sonoran Desert on foot. The ongoing humanitarian crisis caused by border-enforcement policy has claimed the lives of over seven thousand people since 1998. Human remains are found on average once every three days in the desert of southern Arizona...

In spite of this, No More Deaths remains committed to our mission to end death and suffering in the desert and will continue to provide humanitarian aid, as we have for the past 13 years.

This is actually an admission that No More Deaths was and is actively engaged in criminal behavior in violation of Title 8 USC 1324, which should be used in their trial for such offenses.

Time for AG Sessions to put up or shut up.