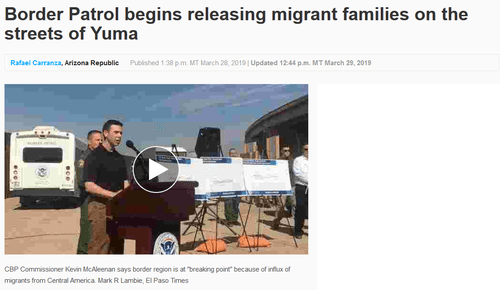 Border Being Overrun: But Not An Emergency!

From the Arizona Republic:

U.S. Border Patrol officials in Arizona said they have started releasing migrant families from their custody into the streets of Yuma because processing centers can’t cope with the large numbers of arriving families and minors.

Community groups in the Yuma area have set up temporary facilities to house the families and to provide food and shelter while they assist migrants with travel plans to leave the border city.

The Border Patrol issued a statement Thursday announcing its decision, which followed the lead of officials in the Rio Grande Valley in south Texas, who last week began releasing families from their custody.