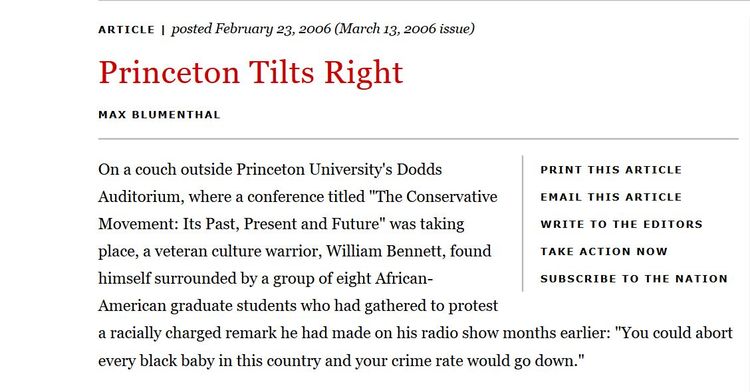 In his long, boring article Princeton Tilts Right (The Nation, March 13 2006), part of the evidence that Max Blumenthal cites to prove that Robby George's James Madison Program is a covert Klavern is...me. Blumenthal describes me as a "white nationalist author." And he complains that I was invited to speak at a Madison seminar on "Contemporary Politics of Immigration in the United States" last year.

Of course, it's absurd to describe me as a "White Nationalist". My book Alien Nation focuses on the political nation and makes a broad case that current immigration policy particularly hurts American minorities, above all blacks.

But even if I were I a White Nationalist, so what? Would Blumenthal object to a Zionist being invited to speak?

What is particularly disingenuous about this Blumenthal bilge is that anyone can see, by clicking here, scrolling down and clicking on the January 28-29 Schedule icon, that the conference contained numerous orthodox academic types, who in fact upheld Princeton's honor by being suitably scandalized at what I had to say. And it was organized by Carol Swain, the remarkable Vanderbilt Law professor who is herself an African-American.

This doesn't fit Blumenthal's KKKonspiracy theory. So he doesn't mention it.

I used to think that this sort of thing was deliberate. But I have come to the conclusion that Blumenthal and his ilk, such a plague on American debate, are genuinely in a sort of religious frenzy, using falsehood to whip themselves up into hysterical rage. Faith explains the extraordinary naivety of some of their arguments. Blumenthal just assumes that to assert someone is a White Nationalist is enough to prove that they are evil.

Similarly, Blumenthal attacks political scientist James Kurth, who he says is George's "mentor," for having once written about "the collapse of the Protestant (WASP) ascendancy in the American intellectual and legal elites and...the ascendancy of Jews into those elites." He doesn't say why this comment is so outrageous. Apparently, he thinks it's self-evident.

Then Blumenthal turns around and complains that "George [a Catholic] is known around campus as a nice guy whose attendance at High Holiday services with his Jewish wife embodies the personal qualities that have endeared him to the Princeton community." Apparently, what endears you to the Princeton elite is self-evident too.

Last time I had to give Blumenthal a boot, he didn't publish a email address. But he now has a blog and it looks like he can be contacted here.