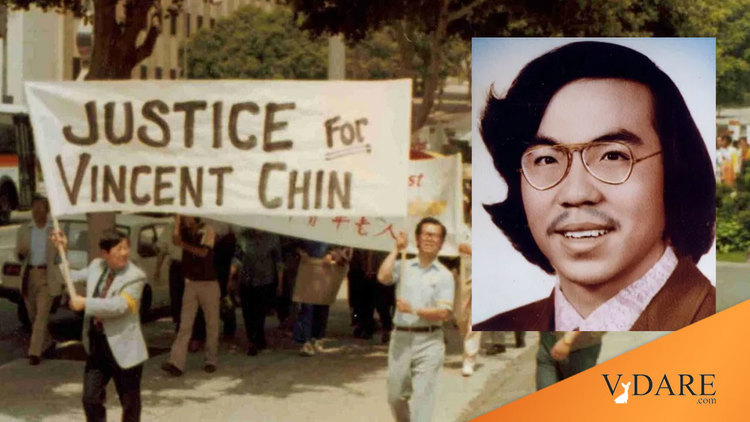 Blaming Whitey For The Thirty-Year Old Killing Of Vincent Chin

Vincent Chin was killed 30 years ago. No similar case since. He was murdered by two angry UAW union members because they thought he was Japanese. Did I mention 30 years ago? Well, the racist dim bulbs at the San Francisco Chronicle don't want you to forget about Chin. Why? Because they are using Chin as a tool for their own racist agenda. Blaming whitey.

Remembering Vincent Chin: Pete Hoekstra and Being Asian in America

On the night of June 19, 1982 in Detroit, MI, after a confrontation at a local club where Vincent Chin was having his bachelor’s party, two auto workers, Ronald Ebens and Michael Nitz, beat Chin with a baseball bat until he slipped into a coma. He died four days later on June 23, 1982. During the investigation and subsequent trial it became clear to many that this was a hate crime, with Chin, who is Chinese, being blamed for the job losses in the United States and the rise of the Japanese auto industry. The light sentences and drawn-out judicial process galvanized the Asian American community and brought into view the violence, intimidation and racism that many Asian Americans had been experiencing for generations.

One of the lessons of this incident was the real impact and the insidious nature of racial, cultural and ethnic stereotypes about Asian Americans. The stereotype that we “all look alike” is not born from the wild imagination of a community, but from years of being asked some derivation of, “Where are you from?” “What are you?” or “What’s your nationality?” This constantly reinforced assumption about Asian Americans only reinforces the idea that, no matter how long we have been here, no matter what we have done, or no matter what we have declared, Asian Americans are not fully American.

Just don't ask Wen Ho Lee, Ch'ien Hsüeh-sên, or Katrina Leung about their loyalties. But there is nothing like that concerning Chin. He had the misfortune to be at the wrong place at the wrong time. Sort of like some other Chinese Americans as we shall see.

But the real crime is that racists like Reyes-Chow, who is a descendant of the Chinese elite of the Philippines, is trying to blame whites for racism directed against Asians and could only find a 30 year old incident for which to indict white people.

Of more interest is that he studiously ignores the ongoing race war directed against Asians by blacks in the San Francisco Bay Area and nation wide. He also studiously ignores the issue behind the advertisement he criticizes. No complaints of Chinese merchantilism. No concerns about the displacement of American industrial workers by virtual slave labor in Red China. Perhaps because he is Chinese... Or, like Hugh Hewitt, he has lots of Apple stock.