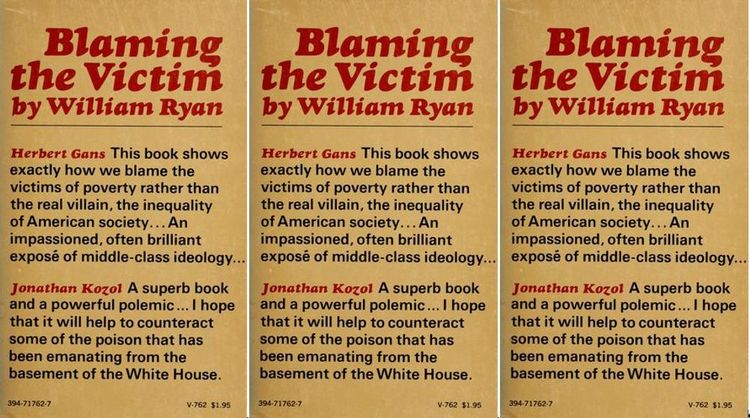 "Blaming The Victim"—But Who IS The Victim Of Welfare?

The OpenLibrary.com web page for William Ryan's 1971 book Blaming The Victim has this cover:

The WikiPedia web page on "victim blaming" says that's the oirgin of the phrase, which is more often heard in regards to crime victims, especially rape victims. However, William Ryan intended it as a critique of the 1965 Moynihan Report, which included sections like

Chapter III. The Roots of the Problem.

Chapter IV. The Tangle of Pathology.

Interestingly, Ryan said that part of "blaming the victim" came from an abandonment of hereditary explanations for success and failure:

The old-fashioned conservative could hold firmly to the belief that the oppressed and the victimised were born that way — “that way” being defective and inadequate in character or ability. The new ideology attributes defect and inadequacy to the malignant nature of poverty, injustice, slum life, and racial difficulties. The stigma that marks the victim and accounts or his victimisation is an acquired stigma, a stigma of social, rather than genetic origin.[P. 7, quoted here]

It's true that trying to lift people with low IQ out of poverty by education isn't going to work.

However, the underlying wrong assumption of this "Blaming The Victim" idea is to think that the recipient of welfare is the victim. Recipients of welfare are getting a  monthly stipend, free medical insurance, more food stamps than they can use,  and have no work to do.

The victim is the taxpayer.