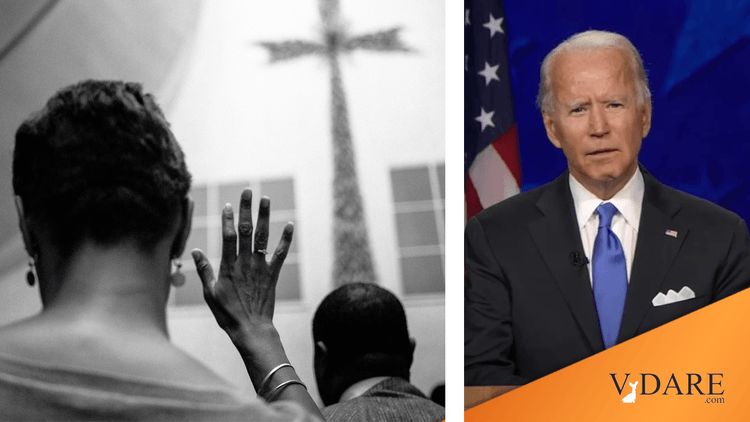 Blacks Are Keeping The Democratic Party From Abandoning God Entirely

Michael S suggests rather than an electorally unified and active black population directing the Democrat party, the DNC tells blacks what to believe and they believe it:

I’m sure the arrow points in both directions, depending on where and what.

It brings to mind the plantation analogy white conservatives love hearing non-Democrat blacks talk about. There could be some truth to it, though as Michael allows it doesn’t apply to every issue. Religion is one such issue. The DNC would be happy to jettison God from the party and the platform—separation of church and state!—but blacks make that impossible: Some party functionaries may want to cut “under God” from the pledge of allegiance, but Barack Obama mentioned God once, Kamala Harris mentioned Him twice, Michelle Obama thrice, and Joe Biden five times in their respective convention speeches. Bernie Sanders’ irreligiosity didn’t do him many favors in South Carolina. While Sanders beat Biden among voters who never attend religious services, 36%-24%, Biden crushed Sanders among those who do, 52%-17%. Blacks are the most churchgoing race in America, and churchgoing blacks are more likely to vote than blacks who don’t go.