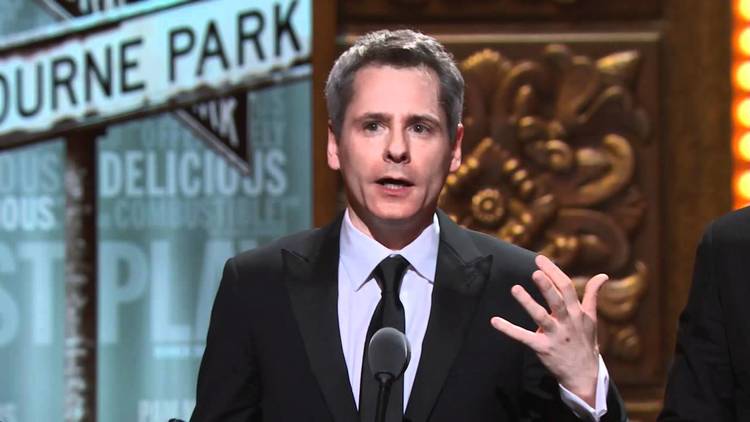 It's always fun to keep up with the adventures of Bruce Norris, Angry White Playwright. He's the author of the best Chicago real estate play since Glengarry Glen Ross, Clybourne Park, which I reviewed for Taki's here. (And here's a real life version of just how far nice liberal white gentrifiers in Chicago will go to clear blacks from Lincoln Park.)

Clybourne Park isn't terribly politically correct, but only a few people have noticed so far.

The Pulitzer Prize-winning playwright Bruce Norris has called for a boycott in Germany of theater productions in which white actors are cast in roles explicitly written for black performers. In a letter addressed to fellow members of the Dramatists Guild, a trade association for writers, Mr. Norris condemned such casting, which he described as widespread in Germany.

Mr. Norris wrote the letter after his experience with a production of his Tony Award-winning play, “Clybourne Park” at the Deutsches Theater in Berlin, in which a white actress had been cast to play a black character.

Remember those two black German guys in Milli Vanilli? They're probably not busy. Bruce should give them a call, see if one of them will play Bruce's African-American lady in drag.

In the letter, which has been posted on the Dramatists Guild’s Web site, Mr. Norris said that it was his final correspondence with the management of the Deutsches Theater that caused him decide to withdraw the rights to the production.

It's worth noting how much power playwrights have relative to screenwriters. Can you imagine Chris Terrio, screenwriter of Argo, ordering Ben Affleck not to play CIA agent Tony Mendez in Argo because Ben's not Hispanic? It's close to unthinkable in Hollywood for a screenwriter to call off a production because he's unhappy with the casting of his script, but playwrights have had this legal right since 1919. Legally, American playwrights are Ayn Rand heroes who can blow up any production of their work they find displeasing.

Indeed, I have this wacky theory that when New York playwrights flooded out to Hollywood after the invention of the talkies, a reason that so many became Communists was because the movies turned out to be a collaborative enterprise where they didn't have all the power they had had back in New York. All we need, they reasoned, is to collectivize all property to restore me to my rightful property rights as sole arbiter of what happens to productions based on my writing.

“After much evasion, justification and rationalizing of their reasons,” he wrote, “they finally informed me that the color of the actress’s skin would ultimately be irrelevant, since they intended to ‘experiment with makeup.’ ”

"Colorblind casting" has been the approved norm in American theater for a long time. For example, I saw a production of Bertolt Brecht's Galileo at the Goodman Theater in Chicago around 1986 in which a black actor played a 17th Century Italian cardinal. But, it doesn't work the other way. White guys can't play Othello anymore. This isn't much of a burden, though, because there are more black actors than there are roles for blacks in all the plays in the repertory.

In regard to mounting Clybourne Park in Berlin in German, the whole enterprise seems pretty hopeless to me. I get what Clybourne Park is about because, just like Norris, I've stood on Clybourn with other white gentrifiers and tried to puzzle out just how fast The Powers That Be will get around to tearing down the Cabrini Green housing projects and sending the residents away to pester less privileged white people. Will we get rich before we get mugged? But, from reading reviews, I don't think that many other white Americans really get the play. I doubt if Berliners will have much of a clue at all, no matter who is cast.

... An online petition has also started at Avaaz.org to stop this practice in German theaters in reaction to a recent production of Herb Gardner’s “I’m Not Rappaport” at Schlosspark Theater in Berlin, where a white actor played Midge, a black character.

In other words, German theaters sometimes use blackface when putting on American or English plays with black characters. This was tolerated in the English-speaking world until not that long ago: Sir Laurence Olivier directed himself in blackface in his movie version of Othello as recently as 1965.

On the other hand, Fred Armisen, who is 3/4th white and 1/4th Japanese, played Barack Obama in blackface on Saturday Night Live for several years. Of course, the blackface was a version of offering up a hostage, just to prove that SNL would never, ever make fun of Obama.