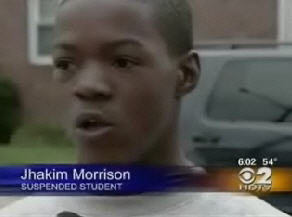 Black vs Hispanic Riot in School

100 Students Involved In Black-on-Hispanic Brawls At NY School... is one of the headlines on the Drudge Report right now, right between Dead goldfish offered the vote in Illinois... and  76-Year-Old NYC Pickpocketer Arrested For 73rd Time!

Hempstead High is in the Long  Island village of Hempstead. Hempstead is one of the first places on Long Island to see Mara Salvatrucha activity. At the moment, Wikipedia says of Hempstead (nicknames The Hub, The 'Stead, Blackville) that

Hempstead is one of the few Black and Latino majority neighborhoods on Long Island (along with Roosevelt, Uniondale, Freeport and Wyandanch). It is also home to a large Salvadoran population.

But besides the "Uh-oh" there's the media point—the "black vs. Hispanic" thing belongs in the headline, where Drudge, with his ever reliable tabloid instincts, put it.  And the media needs to know that, because there'll be more of these riots.