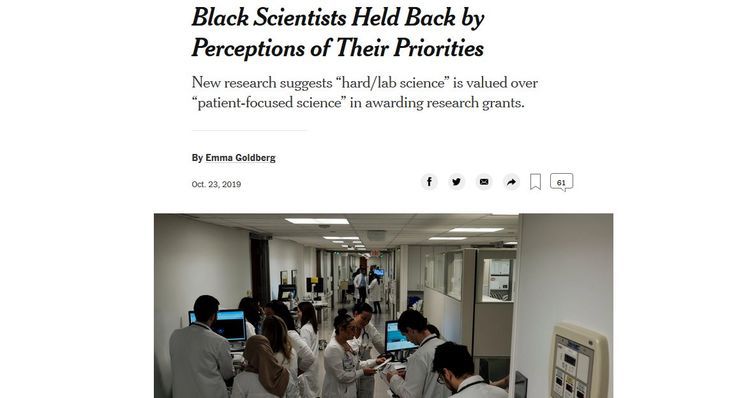 Black Scientists Held Back by Being Less Scientific

Black Scientists Held Back by Perceptions of Their Priorities

Scientific research ideally is colorblind, with merit the only factor in hiring, publishing or the awarding of research grants. But the reality often falls short.

Eight years ago, a study published in Science found that black researchers were 10 percentage points less likely than white ones to receive funding from the National Institutes of Health, even after controlling for factors like educational background, previous research awards and publication record. Its authors theorized that the difference might reflect an accumulation of slight advantages over the course of white scientists’ careers.

That study, which the N.I.H. itself commissioned, prompted the agency to put $500 million toward a 10-year initiative to improve the situation, for example by increased mentoring of minority researchers and efforts to address possible bias in peer review.

But new research suggests racial disparity in grant funding persists, and offers a fresh theory about a source of some of it: research topic choice….

The new study, commissioned by the N.I.H. and published recently in Science Advances, examined data from nearly 160,000 applications in the years 2011 to 2015. It showed that clinical research on community-level health interventions has a harder time getting N.I.H. support than research focused on cellular science, and that black scientists are more likely to be seeking to do the former.

Disparities in topic choice among black and white scientists account for about 20 percent of the N.I.H.’s racial funding gap, according to the study.

George Santangelo, senior author of the new study and director of the N.I.H.’s Office of Portfolio Analysis, said “an inordinately large fraction of African-American applicants” applied for funding in the topic areas less likely to win funding. Nearly 40 percent of proposals from black researchers were on a cluster of eight topics, most deemed less likely to be funded.

Some of the keywords used in applications less likely to get funding: “socioeconomic,” “patient” and “disparity.” The lowest award rate was for those using the terms “ovary,” “fertility” and “reproductive.” Successful applications, by contrast, tended to use words like “neuron” and “cartilage.”

… Previous research on N.I.H.’s funding gap, particularly a 2018 follow-up study by Dr. Ginther in PLOS One, showed more than a quarter of the racial funding disparity can be accounted for by discrepancies in white and black researchers’ publication histories — black researchers had fewer papers published and fewer citations. That finding pointed to mentorship as a way to help such researchers navigate academic publishing and thus narrow the racial funding gap.