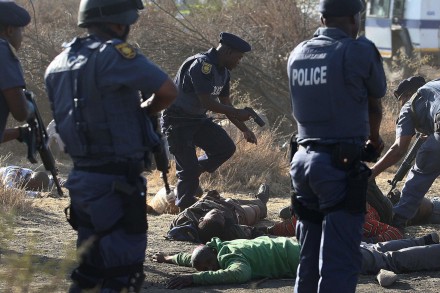 AP
The horrific images and the carnage reminded many of the events that took place during South Africa’s apartheid era.

In a spectacle that reminded many South Africans of the apartheid past, police stand over the bodies of striking mineworkers killed in a confrontation at the Lonmin Platinum Mine near Rustenburg, South Africa, Aug. 16, 2012

Well, it might remind some people of the old, white-dominated South Africa, but a better comparison would be to every other country on the continent of Africa. Why did the old, white, South African police have problems like this? Why does even the new, black-dominated police force have troubles like this?
Well, here are the miners: 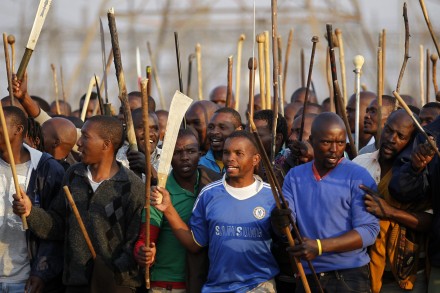 Striking miners brandish pangas and fighting sticks outside the Lonmin mine near Rustenburg, South Africa, Aug.15, 2012.

South Africa is one of the few African countries to be organized enough to have (a) mines and (b) unions. The strikers here look like they're not just going to "strike"—meaning withdraw their services, and protest—they're going to smash, crush, chop, and slice as well.

Cold Steel is an American company that manufactures knives, machetes, and sticks for self-defense.

Here's Cold Steel's Lynn Thompson demonstrating a panga, a slightly gruesome demonstration with a hanging bag of meat, the point of which is that these things can take your arm off:

He also sells an African walking stick, similar to the traditional fighting sticks (knobkerries) seen above:

The Zulus are perhaps the fiercest, most combative tribe in all South Africa. In the early 1800’s the Zulu King, Shaka, subjugated the vast area of land between the Phongolo and Mzimkhulu rivers and laid the foundations for the Zulu Nation.

Then in 1879 the Zulus handed the British one of the most humiliating defeats in history at the battle of Isandlwana, when they annihilated an entire column of 1200 Englishmen (who were supported by artillery and cavalry), and did it with little more than cowhide shields and their Assegais, or short stabbing spears. Even to this day, a Zulu tribesman is nobody to be trifled with. The thing that distinguishes the Zulu people most is their fondness for using a Knob Kerrie, or walking stick.

Our President, Lynn C. Thompson, who regularly hunts in South Africa, has amassed an impressive collection of these handmade sticks. Most of them are made from indigenous African hardwoods like Wild Olive, Pink Ivory, and Red Bush Willow, and are topped with a distinctive ball or knob. Adapted for the western marketplace, the Cold Steel African Walking Stick features some of the best parts of traditional Zulu Kerries like an undulating shaft, and the traditional geodesic ball grip. However, instead of using a costly exotic hardwood, we’ve made ours out of black Polypropylene. This means that, in addition to being unbreakable, it’s also impervious to the elements. It will never rot, warp, crack, splinter, swell, shrink, mildew or fade, and it’s ready for all the wear and tear you, and the world, can dish out. Although its primary mission is to be a walking stick to aid one’s balance when crossing uneven, slippery, wet or rough terrain, it can also serve as a pointer, lever, or probe. It also makes a formidable tool for self-defense in an emergency.

I couldn't find video of Thompson breaking things with it, but here he is with a similar stick:

In the famous South African  incident known as the Sharpeville Massacre, in 1960, white police, under attack from thousands of rioters,   killed 69 people apparently in self-defense. It's still remembered and commemorated in the New South Africa every year.

This massacre will be out of the headlines very shortly.