Wouldn’t you know it, another hoax.

This time, it was at Eastern Michigan University, The Washington Post reports:

Last fall and in the spring, the otherwise quiet campus of Eastern Michigan University was hit by three ugly incidents of vandalism targeting blacks that rocked the community.

The first came in September, when “KKK” was sprayed in red, white and blue paint on the wall of a dormitory, along with a threatening racial slur telling blacks to “leave” the school in Ypsilanti, about 11 miles southeast of Ann Arbor.

Here's the "KKK" being cleaned off by university staff—apparently drawn by someone not good at making the letter "K": 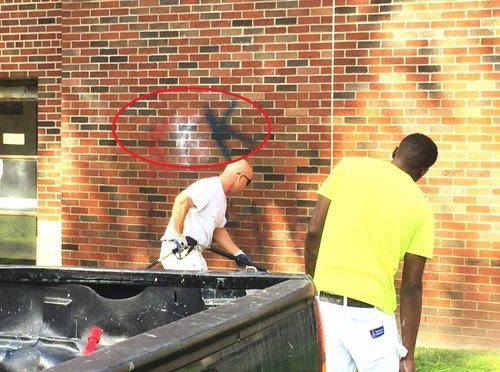 Then, on Halloween, the same ominous hate message using the n-word and ordering blacks to leave showed up on another building, this one right next to the campus’s monument to Martin Luther King.

“It really has rocked our community,” Judith Kullberg, an EMU political scientist and president of the faculty senate told The Washington Post. “In this whole context of a very tense presidential election it has raised anxiety here considerably.”

In the spring, a third racist message was left in a men’s restroom stall.

Except that the guy behind it all, cops say, is black: Eddie Curlin, “a student at the school from 2014 to 2016, currently serving a one-to-five year sentence on an unrelated charge of receiving and concealing stolen property, according to a university statement.” 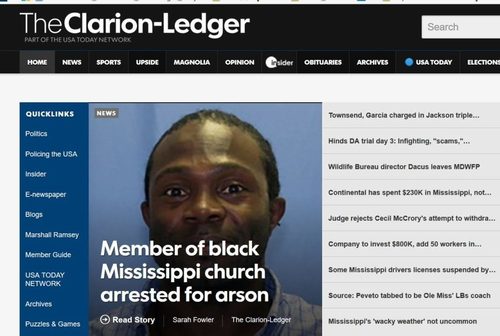 To its credit, the Post notes that Curlin’s crime isn’t the first, but then blows it by concluding that hoaxes are still “relatively rare:”

In December, for example, an African American member of a historic black church in Greenville, Miss., was charged with setting fire to it, and writing “Vote Trump” on the outside of the building. [Miss. black church fire was called a hate crime. Now parishioner has been arrested for it.]

In March, an American-Israeli Jewish man was arrested in connection with a series of bomb threats aimed at Jewish community centers in the United States and elsewhere.

To judge from news accounts at least, such cases are still relatively rare. Most arrests and convictions for hate-related crimes of violence or vandalism follow the traditional pattern.

Relatively rare are they?

Speaking of hoaxes, it turns out that the the “lynching” in New Hampshire wasn’t a lynching after all. Newsweek reported that it was just kids horsing around. Now, what about that “racist” graffiti  at the Air Force Academy prep school? So far, nothing new.