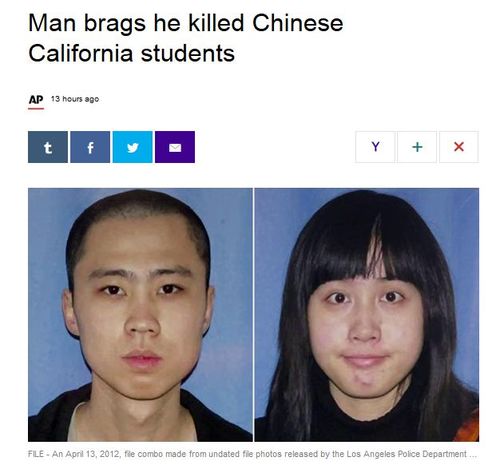 Prosecutors played the video of Javier Bolden boasting to a cellmate after his arrest in the killings of Ming Qu and Ying Wu.

The 23-year-old engineering students were shot on April 11, 2012, while sitting in a parked car in a neighborhood near the campus.

The deaths fueled concerns in China about the safety of students abroad and it spurred USC to provide more protection around campus.

Inquiring minds in the comment section wonder about the "Man" who shot two Chinese students.

Wait! So instead of showing the photo of the confessed double murderer, Yahoo! is showing the pictures of the victims instead? I don't get this. Could somebody more intelligent than I am explain to me why on Earth would Yahoo writers do that?

I've tried to explain about the AP Stylebook here. The principle that they use is that race is relevant in the case of the "first black" to do something good. The thousandth black to commit an armed robbery is referred to as a "Man". Here's Javier Bolden and his alleged accomplice, Bryan Barnes. ("Alleged" because Bolden hasn't been found guilty—Barnes already confessed and pled guilty.)

Inquiring minds might also want to know about the "neighborhood" near the campus where the unsuspecting Chinese were murdered. It's an "urban" neighborhood. From the New York Times:

In the lawsuit, the victims’ parents said the university misrepresented the safety of the campus in its online application.

The 15-page lawsuit accuses the institution of hiding behind the word “urban” and not saying the campus is in a high-crime area. It also notes that Chinese students in particular would interpret “urban” to mean the university is in a safe area.

2 Arrested in Killings of Students From China, By THE ASSOCIATED PRESS, Published: May 19, 2012

You see their point, but I don't know if they have a case—as I've pointed out, under the Fair Housing Act, a Real Estate Agent is not allowed to warn you about a "high crime" neighborhood, because of discrimination. See Civil Rights Law Doesn't Care If You Die, continued: Fair Housing Act Forbids Realtors To Tell You That You're Moving Into A High-Crime Neighborhood.

The same kind law probably forbids colleges from warning that their campuses are located near the ghetto. But no law forbids the Associated Press from reporting it—just their own stylebook.