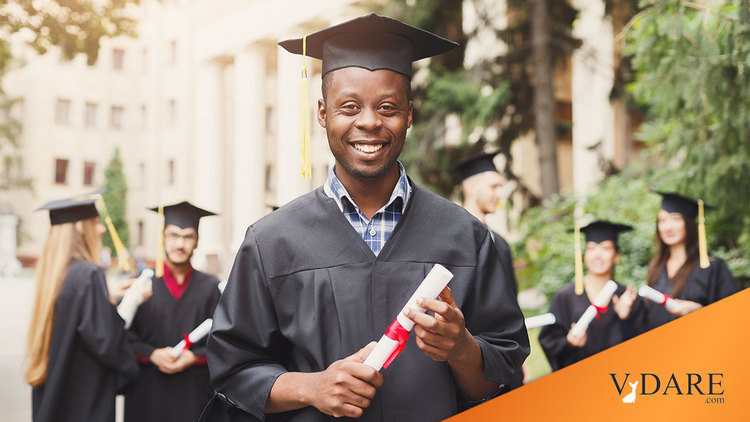 As I pointed out earlier, an adjunct law professor at Georgetown U. has been summarily fired for expressing in a private conversation “angst” over the low performance of many of her black students. Another professor to whom Sandra Sellers was speaking expressed neither agreement nor disagreement, so he has been suspended.

The Establishment is aghast over anybody saying this.

Yet, if anybody could remember facts uncongenial to the Narrative in their head, they wouldn’t be surprised that blacks on average do poorly on law school grades. Law schools professors and administrators have been angsting for generations about blacks tending to wind up toward the bottom of the class. Eugene Volokh points out in Reason:

There appears to be some data on this; here, for instance, is an observation from Yale law professors Ian Ayres & Richard R.W. Brooks in Does Affirmative Action Reduce the Number of Black Lawyers?, 57 Stanford Law Review 1807 (2005):

With the exception of traditionally black law schools (where blacks still make up 43.8% of the student body), the median black law school grade point average is at the 6.7th percentile of white law students. This means that only 6.7% of whites have lower grades than 50% of blacks. One finds a similar result at the other end of the distribution—as only 7.5% of blacks have grades that are higher than the white median.

People have been talking about this forever, but almost nobody can remember that because facts don’t stick in the human mind much without a truthful narrative. And because you can get fired for having an honest understanding of how the world works, fewer and fewer have one, even in the privacy of their own minds. After all, if you know the truth you might not immediately screech ignorant hate when somebody mentions the truth, and that could get you suspended.

For example, in 1991 a Georgetown law student named Timothy Maguire leaked the results of a sample of black and white students at Georgetown Law to a campus newspaper, which caused a similar ruckus. From Commentary in 1992:

My Bout With Affirmative Action

I came out of my encounter with the politically correct all right, I guess.
by Timothy Maguire

I came out of my encounter with the politically correct all right, I guess. I was graduated from Georgetown University Law Center (GULC), as the Georgetown law school is called, in spite of calls for my expulsion. I received only one death threat. And I got lots of publicity, which I have tried to use to my advantage (for example by writing this article).

Nevertheless, the response to “Admissions Apartheid,” the exposé I wrote last spring of the racial preferences in the admissions program of GULC, was the most depressing experience of my academic career. This response revealed that a policy, whose fairness and wisdom are doubtful, has remained in force not on its merits but through the suppression of any criticism of its flaws. And the response also raised questions about the honesty and integrity of the administrators of GULC’s affirmative-action programs.

In “Admissions Apartheid,” which was published in our law-school student paper, I used a random sample of applications to GULC to generalize about the respective credentials of blacks and whites who were ultimately admitted. …

It turned out, moreover, that my random sample had understated the race-based disparities at the school. In 1989, the median LSAT for incoming white students at GULC was 42; for incoming blacks it was 33, “up from 32 last year.”

Nor was this extreme disparity confined to Georgetown: exactly the same figures obtained at the University of Texas Law School. And the most recently reported average LSAT score for whites admitted to all American law schools was 36; for blacks it was 28.

Indeed, it is generally conceded that less than 1 percent of top law-school student bodies would be black under race-blind admissions. To cite only one instance, the director of admissions at the University of California Law School at Berkeley noted several years ago that, nationwide, “only five blacks who took the LSAT had scores and GPA’s that equaled [Berkeley’s] average.” Yet blacks are represented at many law schools in greater numbers than they are represented among college graduates. This can be accomplished only through a process of insulating blacks from competition with better-qualified whites and applying much lower standards to black applicants.

… The consequence is that black affirmative-action beneficiaries are routinely outperformed by white students. They almost never obtain “race-blind” invitations to the most prestigious student journals. Their success in moot-court competition is often assured only by all-black moot-court teams. They regularly complain that the better firms do not hire them because such firms refuse to look beyond grades (in my graduating class, only one out of about 60 black students graduated in the scholastic top third of the class).

… Thus, having been branded a “racist,” I found it difficult to obtain legal representation in fighting the move to expel me. …

So 1991 was a lot like 2021 is. But 30 years ago a white accused of telling the truth at least had a puncher’s chance, and Maguire got enough help from lawyers to at least be allowed to graduate.