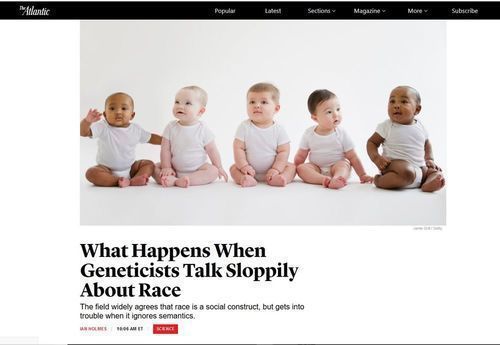 Ian Holmes: "What Happens When Geneticists Talk Sloppily About Race"

Summary of this article from The Atlantic: the word “race” is Bad, but the word “population” is Good.

What Happens When Geneticists Talk Sloppily About Race

The field widely agrees that race is a social construct, but gets into trouble when it ignores semantics.

IAN HOLMES is an associate professor of bioengineering at UC Berkeley.

… Race is a concept defined by society, not by genes. It’s true that people around the world differ genetically due to their ancestry, and that people’s racial identity may be statistically correlated with their ancestry, albeit unreliably. But “race” does not mean “ancestry,” and it’s a loaded term for scientific outreach: Biological races are not a current scientific concept and often reinforce historical biases. …

In his op-ed, [David] Reich explicitly acknowledges that race is a social construct. At several places in the text, he goes to great pains to distance himself from racism, and to point out that traditional ideas of race are contradicted by genomic data (including his own work). For instance, he notes that the ways different people and societies think about race are inconsistent:

Uh … Have you ever thought how variable are the social rules for constructing who is in your extended family? Those really vary from place to place, time to time, and even from task to task. For example, in making up your Christmas card list, you might well include distant relatives you would not give a Christmas present to or invite to your daughter’s wedding.

On the other hand, this WASP bilateral tendency breaks down when it comes to Presidential contenders from WASP brand name dynasties like the Bushes and Clintons. George P. Bush is sometimes considered potential Presidential Timber some day because he inherited the Bush name through the male line. His four cousins who did not inherit the Bush surname through their mother Dorothy Bush are just as closely related genetically to the two Bushes who were Presidents, but they don’t have the famous last name, so nobody ever thinks about them as Presidential prospects.

This family stuff is complicated and confusing. And yet, only the most deluded ideologues says “Extended family does not exist.”

Similarly, “species” are difficult to define and can be contentious to identify. For example, under the Endangered Species Act, tens of billions of dollars of real estate development hinged on whether the dark-feathered California gnatcatcher bird was an endangered species or merely a race of the common and mostly light-feathered Baja gnatcatcher.

Reich goes on to point out that how Americans racially categorize themselves correlates only weakly with genetics. There are complex social reasons for this, including a historical legacy of race-purity laws based on pseudoscientific ideas (for example, the one-drop rule, which classified Americans as black if they had even a single black ancestor). And so, for example, some Americans now identify as black due to a single grandparent from sub-Saharan African ancestry, or an equivalent proportion of their DNA. A 2015 analysis of 23andMe data, co-authored by Reich, found that around one in 10 self-identified African Americans have less than 50 percent of their genome attributable to African ancestry, and around one in 50 have less than 2 percent.

Actually, that study found that the average black in America is 385 times blacker than the average white. That doesn’t seem very murky to me.

It’s quite bizarre that white academics love to imply that there are, somewhere in the U.S., vast numbers of people oppressed by miscategorization of their race, when, in reality, most self-identified blacks are enthusiastic about the current system and self-police the boundaries of racial blackness. Thus, for example, even though Rachel Dolezal had idiosyncratic reasons but understandable personal reasons (her parents adopted a number of black children and raised them as her siblings) for adopting a black identity, she was shamed and kicked out of black organizations.

Likewise, in Brazil, Barack Obama wouldn’t be classified as black. But in the United States, Obama went to great trouble to identify as black and it didn’t seem to hold his career back, did it?

The most obvious recent example of racial self-categorization causing genetic information to be overlooked was the President of the United States choosing to self-identify on the 2010 Census as black and only as black. But for some reason, academics almost never cite that example …

The reality is that the one-drop rule has socially constructed the traditional American gene pool away from a white-black continuum, as seen in Brazil, and toward a J-shaped curve in which the great majority of self-identified blacks have highly substantial sub-Saharan African ancestry and in which the vast majority of self-identified whites have barely any. If you think about who marries whom under the old rules for a few minutes, you’ll understand why this would almost have to be true.

Holmes draws a sharp distinction between “populations,” which are good and scientific and are very, very different from “races,” which are bad and unscientific.

But his op-ed starts losing clarity when, thanks to some unfortunate language, the distinct concepts of “races” and “populations” seem to become admixed themselves. As an example, in discussing his lab’s use of self-reported race in tracking down genetic risk factors for prostate cancer, Reich places socially constructed terms (like “African-American”) right alongside the results of statistical inferences about genome history (such as “probably West African in origin”). He’s apparently trying to defend the use of both, but in the process somewhat blurs his earlier distinctions between race and ancestry.

If you stop and think about this for a minute, you’ll see that Holmes is using “race” to mean American medical patients who checked the “African-American” box under “race” on their forms versus a racially purer “population” of people of purer West African descent as, say, determinable by modern genome scans. With the recent sharp decline in the cost of genome scanning since Reich did this study, it would be possible to throw out of the study people who self-identify as black but who are actually less than a certain percentage black and thus are adding noise to the data.

But, even with a methodology that lets some noise creep into the genetic data, Reich’s study proved a success. Self-identifying as “African-American” is a risk factor for prostate cancer and doctors and African-Americans should be aware of that fact. It turned out that it’s good for patients, doctors, and medical researchers to think in terms of “black” / “African American” as a way to keep more men from dying of prostate cancer.

It turns out, in this instance and in so many others, that the government’s racial terms are good enough for government work.

In reality, the word “population” as used by “population geneticists” is just a euphemism so that they wouldn’t be called “race geneticists.”

For most racial groups, we lack complete genealogical documentation of their ancestries, so we use external evidence drawn from, say, physical anthropology, linguistics, history, religious studies, and the like. (In contrast, the looks, such as coat color, of a thoroughbred race horse doesn’t matter much because of the existence of Stud Books documenting the entire family tree of each new horse for up to a couple of dozen generations.)

In the 19th century, for example, it was not uncommon for anthropologists to classify black-skinned, wooly-haired inhabitants of Melanesia as far-flung members of the sub-Saharan African race. There wasn’t much evidence that sub-Saharan Africans had recently migrated all the way to the Pacific Islands, but they did look quite a bit alike.

Over time, however, the evidence piled up that the two races were not closely related genealogically (for one thing, they don’t look all that much alike if you spend time around both), and by the 20th Century, most anthropologists assumed they had just converged evolutionarily on a rough approximation of a look that works well in the tropics, or perhaps they originally looked like and just kept the same look for tens of thousands of years.

The ongoing advances in genetics gives us more in the way of genealogically information, and indeed it turns out that West Africans and Melanesians are less closely related in ancestry than the vast majority of racial groups.