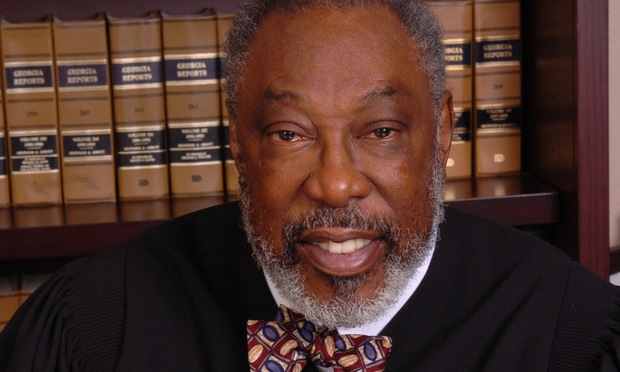 Marvin Arrington is a black judge in Fulton County , Georgia who last week asked all the whites present, (mostly lawyers and staff) to leave his courtroom so he could give a Bill Cosby style stemwinder to the blacks present, (mostly defendants.) This caused some controversy, and it reminded me of some of the attitudes of the Old South, with the colors reversed.

Fulton County Judge Marvin Arrington, who last week asked white people to leave his courtroom while he chastised black defendants, on Thursday delivered much the same message to anyone who wanted to hear it.

"We have insanity going on in the black community," he said to the courtroom as TV news crews filmed his spiel. "If we don't say something, the infrastructure of this community is going to collapse. It will be like living in the wild, wild west.

Arrington, 67, stepped into controversy last week when he asked whites to leave so he could lecture defendants about turning their lives around. The judge soberly noted that the whites were mostly lawyers and staff. He said almost all of his defendants in Fulton County are black.

He thought he would be more effective if he did it before a black-only audience which he said was unfortunate because it caused people to focus on his method rather than his message. Civil society, he said, depends on heeding the message.

The judge apologized if he offended any whites but said he was just trying to do some good. He ticked off a list of crimes to help illustrate why he was delivering a message to African-American youth.

The first one he mentioned is the kind of hate crime that doesn't get mentioned in the national press, much:

Arrington said a white man and a white woman were buying crack cocaine near Christian City in South Fulton County when they got into a dispute with the black vendor over the price. The dealer wanted $20 for the rock, the male buyer wanted to pay $15.

"He (the dealer) said, and I quote, 'I get tired of you crackers,' and he shot the fella in the head. The girlfriend said, 'Why would you do that?' And he said, 'We don't need no witnesses,' and shot her in the head," Arrington recalled. A security guard investigated and the gunman killed him. Three deaths, the judge said, in 20 minutes.

Interesting story, and he's saying some very sensible things. But remember, the main point of this story is that Marvin Arrington is a black judge—see his website for photos.(I was surprised to see a judge with a personal website, but it turns out that Superior Court Judge is an elective office in Georgia.) Read the AJC story and see if there's anywhere it actually says that he's black.

Oh, you can tell—if a white judge ordered the courtroom to be cleared of white so he could lecture blacks, it would be a much different story.

This is the kind of story where they frequently add the phrase "who is black" to someone's name, but they haven't done so here. It does say things like:

African-Americans in positions of authority have an obligation to speak out to young people who are on the path to becoming street thugs before they turn into killers, Arrington said.

But hey, white people say things like that, too. (There have been several complaints about it.) Congratulations to Judge Arrington for saying these things, and negative congratulations to the Atlanta Journal-Constitution for obscuring the issue again.