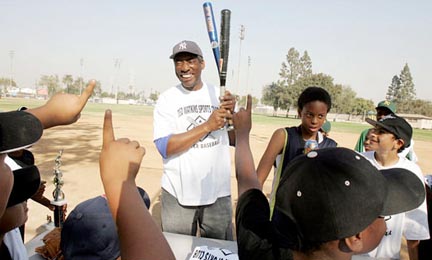 What other publication besides the New York Times could write about black flight from Los Angeles and not use the word "immigration" a single time? Reasons for the Dawson family's exodus are only hinted — the increased violence, a murdered son whose killer was never caught, and "black families are moving out and Latinos are moving in." You have to read deep into the article to see how completely Watts has changed [Watts Changes, and a Mainstay Bids It Farewell, New York Times 11/28/06].

Parents seem to feel more pressure to work longer hours and more jobs these days. And some of the newer, Latino parents favor soccer &#151 not one of the club's sports &#151 and do not speak enough English to converse with Mr. Dawson and the other coaches, who are mostly black. According to Census data, the population of Watts in 1970 was 90 percent black and 8 percent Latino; in 2000, it was 38 percent black and 61 percent Latino.

The Times did get one thing right: the story's subject, James Dawson, is indeed a "mainstay," whose neighborly volunteer coaching of kids' baseball adds greatly to the community's social glue, a quality that we have learned to value more as we lose it. As a coach to pre-teen boys at the local playground, he teaches fairness and good sportsmanship as well as hitting and fielding. His neighbors hated to see him leave.

The Dawsons have moved to safer suburban Lancaster, but James Dawson still drives to Watts three times a week during baseball season to continue coaching, at least for now.