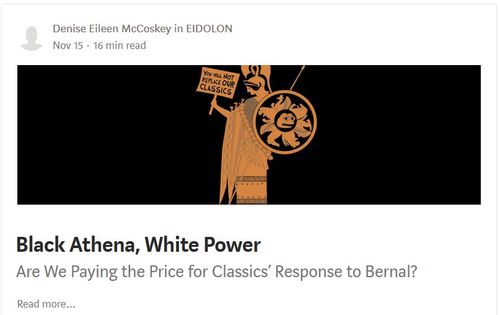 Black Athena And The Tomb Of Antony And Cleopatra

Black Athena, White Power
Are We Paying the Price for Classics’ Response to Bernal?

Denise Eileen McCoskey is a Professor of Classics and affiliate of Black World Studies at Miami University (Ohio). She is the author of Race: Antiquity & Its Legacy, and past recipient of the John J. Winkler Memorial Prize. In 2009, she won the American Philological Association Award for Excellence in Teaching at the College Level.

… In the mid 1990s, a few months before starting my first teaching job, I remember sitting in a lecture hall and listening to a talk on Ptolemaic Egypt. After the lecture, as we all milled about, a black woman from the audience quietly approached the speaker and asked: “Was Cleopatra black?”

Excited that this question, which had become the subject of growing intensity outside the academy, was being raised in the context of a formal classics lecture, I eagerly awaited the response. It came quickly and damningly, for the speaker simply waved a hand disgustedly. Then she turned her back.

… As I look back now, I realize that my feelings of alienation — my recurring sense that many of my colleagues’ questions were valued in ways that made no sense to me while the ones I wanted to ask were forbidden — cannot be separated from the fact that I came of age as a classicist in the time of Black Athena.

My goal in reflecting back on Classics’ encounter with Black Athena (beginning some thirty years ago now) is not to open old wounds — or at least not open them casually — but to insist that we cannot effectively combat today’s use of Greece and Rome by white nationalists until we admit our own role in bringing such ideology about, until we grapple honestly with the fact that in no small way Classics’ response to Black Athena is coming home to roost.

For those who didn’t live through it, the sheer scale of Black Athena’s cultural impact can be difficult to comprehend (but here is a nice starter bibliography). It was a time when questions about the roots of ancient Greek civilization — and especially its connections to Africa — were everywhere — from television documentaries to Italian dub trance music to the cover of Newsweek magazine.

Appearing in the same year as Allan Bloom’s The Closing of the American Mind (1987), Black Athena soon became part of larger conversations “about how to teach the foundational ideas of Western culture” in American universities. Although the subject matter of Black Athena was deceptively straightforward — as author Martin Bernal phrased it: “Black Athena is essentially concerned with the Egyptian and Semitic roles in the formation of Greece in the Middle and Late Bronze Age” (volume 1, p. 22) — such brevity of purpose belied the ways Black Athena sought not only to re-examine the early development of Greek culture, but also to raise pointed questions about the ways early classical scholars had produced a distinctly whitewashed version of Greek origins throughout the 18th and 19th centuries, one that emphasized the alleged purity of Greek culture as well as its superiority over Egypt.

Outlining the development of this approach to Greek history, which Bernal called the “Aryan Model,” in volume 1 of Black Athena, Bernal used archaeological and linguistic evidence in volumes 2 and 3 to argue for a “Revised Ancient Model,” one based in large part on the view the Greeks had of their own cultural origins (their “Ancient Model”), a view that acknowledged early phases of Egyptian and Phoenician colonization, as well as the continuing influence of these cultures on their own.

Egyptian hieroglyphics emerged about 5,000 years ago. Ancient Egyptian high culture emerged very early in human history and then was remarkably stable for thousands of years. So, it would hardly be surprising if Ancient Egypt, like the Fertile Crescent, had influence on Greek culture at the time of or before, say, the Trojan War (about 3200 years ago). Egypt and Babylon were way ahead of Greece, so it’s hardly unlikely that Greeks would have borrowed from the older civilizations, as Greek writers like Herodotus and Plato suggested.

On the other hand, the famous later Greek efflorescence of 2500 years ago (Socrates, etc.) is a remarkable event in world history.

… Bernal’s stance on Egyptian Blackness was panned in a footnote to Greg Thomas’ 2009 book Hip-Hop Revolution in the Flesh: Power, Knowledge, and Pleasure in Lil’ Kim’s Lyricism (evidence of the incredibly wide-ranging influence of Black Athena). When pressed to clarify his position, Bernal would later label Egyptian civilization “fundamentally African,” while declaring the population itself “mixed,” one that got “darker and more Negroid the further up the Nile you went.”

When faced with criticism about his title, Bernal openly admitted that “African Athena” would have been more accurate, infamously adding that his publisher insisted on the title by stating: “Blacks no longer sell. Women no longer sell. But black women still sell!” (Arethusa special issue, pp. 31–32).

Much of the confusion stems from that old Brits often used “black” to refer to dark-haired / dark-eyed people, which is extremely confusing for Americans, where “black” has long meant sub-Saharan African. So African Americans would read old books in which some Oxford professor would refer to Ancient Egyptians as “black” and assume that he meant sub-Saharans.

Moreover, Americans tend not to be very aware of what North Africans look like and assume that people north of the Sahara must be closely related to people south of the Sahara. In most of North Africa that isn’t true, although the Nile is the one corridor where you wouldn’t be major danger of dying of thirst as you cross the desert. On the other hand, the upper Nile is harder to move along that you might expect.

Fortunately, the rapidly progressing science of ancient DNA scans should allow us to answer many of these questions about racial ancestry.

Professor McCoskey is a devout member of the Race Has No Biological Reality cult.

But of course what African American Afrocentrists really desire is to be told that Cleopatra was biologically black.

Say it were announced tomorrow that the long lost Tomb of Antony and Cleopatra:

She shall be buried by her Antony:
No grave upon the earth shall clip in it
A pair so famous.

had been definitively discovered. And it contains an intact, un-graverobbed mummy of Cleopatra, and that David Reich’s lab at Harvard is to analyze her DNA. If Reich then announced that Cleopatra’s DNA is, say, 3/8ths sub-Saharan African, black American Afrocentrists would feel overjoyed and vindicated. As well they should.

Now, I find this scenario unlikely. What we know about her ancestry, which is quite a bit for someone from so long ago, points to southeastern Europe. Her ancestor was Alexander the Great’s general Ptolemy from Macedonia. My guess is that the 1990s Afrocentrist obsession with Cleopatra is just more of the kind of thing Waugh had fun with in Scoop when the Ishmaelite consul-general orates to William Boot:

“As that great Negro Karl Marx has so nobly written … Who built the Pyramids? A Negro. Who invented the circulation of the blood? A Negro.

But if DNA evidence upheld the view that Cleopatra was significantly sub-Saharan, then they would be right.