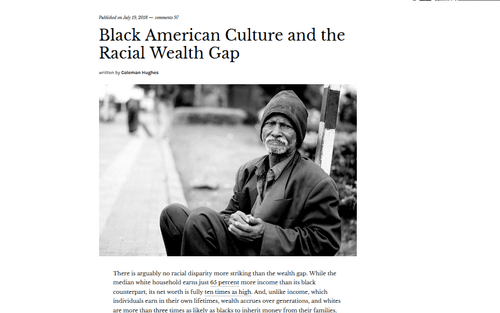 …No element of culture harms black wealth accrual more directly than spending patterns. Nielsen, one of the world’s leading market research firms, keeps extensive data on American consumer behavior, broken down demographically. A 2017 Nielsen report found that, compared to white women, black women were 14 percent more likely to own a luxury vehicle, 16 percent more likely to purchase costume jewelry, and 9 percent more likely to purchase fine jewelry. A similar Nielsen report from 2013 found that, while only 62 percent of all Americans owned a smartphone, 71 percent of blacks owned one. Moreover, all of these spending differences were unconditional on wealth and income.. …

Coleman Hughes is an undergraduate philosophy major at Columbia University. His writing has been featured on Heterodox Academy’s blog as well as in the Columbia Spectator. You can follow him on Twitter @coldxman