Birthday Cake Hate Hoax Crumbles, But Without Legal Consequences To The Hoaxer

The case of the chocolate cake slur, it seems, was simply a hoax.

An openly gay Texas pastor who had accused Whole Foods of defacing his cake with an anti-gay slur dropped his lawsuit against the grocery chain on Monday, issuing an apology that said he was wrong to “perpetuate this story.”

“The company did nothing wrong,” the pastor, Jordan Brown, said in a statement. “I was wrong to pursue this matter and use the media to perpetuate this story.”

He also apologized to the lesbian, gay, bisexual and transgender community “for diverting attention from real issues.”

Hate hoaxes are a real issue. 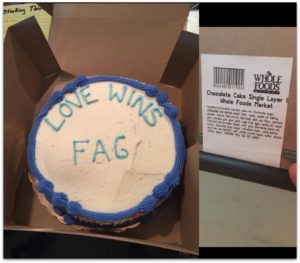 Whole Foods had forcefully rejected the accusations by Mr. Brown, 31, who claimed that he had bought a frosted cake from a store in Austin, Tex., and asked that the words “Love Wins” be written in icing on top — only to discover while driving away that a slur had been added.

Mr. Brown’s apology represented a remarkable about-face from his remarks last month, delivered at a news conference alongside his lawyer, during which he choked back tears as he told the story.

“For me, it was humiliating,” he said then, “because being a pastor who is also openly gay, I’ve had to deal with this in the past and literally the feeling that I had just resurfaced a bunch of painful memories of things that have happened to me.”

But a day after Mr. Brown’s legal salvo, Whole Foods denounced the pastor as a fraud, vowing to press a countersuit that sought $100,000. At the same time, the grocery chain released surveillance footage of Mr. Brown’s purchase that it said proved that the cake had not been tampered with.

Whole Foods said in a statement on Monday that it would drop its lawsuit.

“We’re very pleased that the truth has come to light,” it said. “Given Mr. Brown’s apology and public admission that his story was a complete fabrication, we see no reason to move forward with our countersuit to defend the integrity of our brand and team members.”

The case of the anti-gay cake slur had captivated the Texas capital, where Whole Foods is based, as thousands of people debated the evidence on social media and in comment threads on The Austin-American Statesman.

Is there any existing criminal law under which hate hoaxes could be prosecuted? If not, should there be a law against hate scams?

Clearly, our culture is vulnerable to hate fraud by people looking for money, fame, and/or to spread hatred of disfavored groups such as straights.