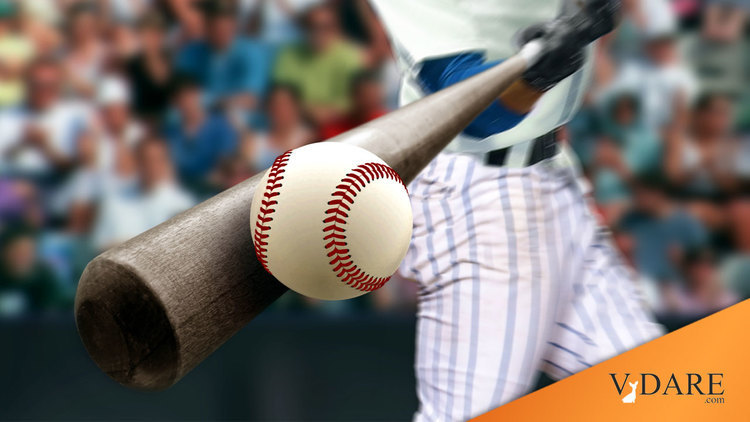 Bill James' All-Time Best Baseball Players by Ethnicity: There is a sizable quantity of academic theorizing that black baseball players are found most in the outfield and a first base because of nefarious stereotyping. For example a 2006 Ph.D. dissertation with the beyond-parody title of "RACE ON FIRST, CLASS ON SECOND, GENDER ON THIRD, AND SEXUALITY UP TO BAT: INTERSECTIONALITY AND POWER IN MAJOR LEAGUE BASEBALL, 1995 - 2005" by Lisa Doris Alexander says:

A significant amount of the literature dealing with race and sports focuses on positional segregation or what is known as "stacking". Jon Loy and J.F. Elvogue’s 1970 article "Racial Segregation in American Sport" pioneered the notion of stacking when they found that black baseball players are placed predominantly in outfield positions, which are "the most peripheral and socially isolated positions in the organizational structure of a baseball team."

An alternative theory is that blacks have played these positions the most because that's what they are best at. To test that, let's look at the top 900 players ever.

Baseball statistics maven Bill James ranked the top 100 major league players at each position in his The New Bill James Historical Baseball Abstract. Here are my counts by ethnicity. I was pretty sleepy when I did these so I probably got a few wrong.

Catching is the most physically debilitating position and that's the second whitest. Pitching is the least sure thing position for star talents because sore arms constantly end the careers of potential stars, and that's the third whitest. (The third most injury-prone position is second baseman, because of collisions with runners while pivoting to turn the double play.) So, it doesn't appear that whites are hogging all the good positions.

As you can see, African-Americans do best in the outfield, where speed matters most, and at first base, which requires the least defensive skill (other than designated hitter), and thus is a good dumping ground for big slow sluggers like Frank Thomas, followed by second basemen (perhaps the Jackie Robinson influence?)

Among outfielders, centerfielders need to be fast and they need to have good throwing arms (e.g., Willie Mays). Rightfielders need very good throwing arms and they need to be fairly fast (e.g., Hank Aaron). Leftfielders don't need good arms, and they tend to be either fast (the young Barry Bonds) or slow (the old Barry Bonds). The fastest leftfielders tend to be faster than the fastest rightfielders because if a player is both fast and has a good enough arm to play right field, they will play center (the most important outfield defensive position) instead. So, there are more top black leftfielders than rightfielders.

Hispanics are best represented at the stereotypical wiry middle-infielder positions, and at right field (perhaps the influence of Roberto Clemente?). Latin American ballplayers tended to be smaller in the past, so they often congregated in the majors at the two defensive positions in the middle of the infield (e.g., Luis Aparicio).

Whites do best at positions requiring a strong arm but not sprinting speed, such as third base, pitcher, and catcher (all at least 90 of the top 100).

Third base, the whitest position, attracted the least talented players until after WWII. During the deadball era a century ago, batters bunted constantly, so third basemen tended to be acrobatic defensive specialists. For some reason, after Babe Ruth ushered in the home run era around 1920, baseball stuck with weak-hitting third basemen. Finally, the arrival of Eddie Matthews in 1952 ushered in the modern stereotype, the slugging white guy with lightning reflexes, like Mike Schmidt. So, the white dominance at third base may be less attributable to segregation than at other positions, since 19 of the James' 25 top 3rd basemen are post WWII players.

African-Americans were prevented from playing major league baseball until 1947, so you can roughly double the black number to get the black percentage over the period when they were eligible. Spanish-surnamed stars go back at least as far as the Cuban pitcher Dolph Luque who debuted in 1914. A few more or less black Cubans quietly played for the Washington Senators beginning in the late 1930s, but Minnie Minoso was the first black Spanish-surnamed star in the 1950s.

I'm using African-American to include black Canadians like Ferguson Jenkins, but no blacks with Hispanic names (e.g., Pedro Martinez is listed as "Spanish-surnamed" rather than "African-American.") Spanish-surnamed is anybody with a Spanish-surname, with no consideration of race or origin (e.g., Babe Ruth's teammate Lefty Gomez from California is listed as Spanish-surname (plus a couple of guys like Bernie Williams who I know are from Latin America despite their names). "Whites" are non-Hispanic whites. I designated the three categories to be mutually exclusive.