Big Business is No Friend to Conservatives 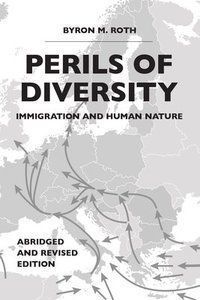 I wrote once how, "[T]he belief that the world is run by Christian monopoly men, eager for war and thirsty for pregnant and barefoot women, is central to the contemporary worldview. As such, debunking leftists’ view of elites should be as important as debunking their view of the underclass." Three and a half years later, and this is still the case. Anyone looking for facts and figures to prove that the West's elites are far from conservative might consult the revised and abridged edition of The Perils of Diversity by Byron Roth. Here are some selections from it that could serve well as ammunition for the next time you argue this point.

In order to fully understand the convergence of opinion among elites, it is essential to understand the role of philanthropic foundations, business organizations and organized religion in supporting the multicultural program of mass immigration. Large philanthropic foundations such as the Ford, Carnegie and the Bill and Melinda Gates foundations have enormous resources with which to influence elite opinion. By targeting funds to selective causes they can have far-reaching effects. They fund the research of individual scholars, set up think tanks, and support academic programs to garner expertise and evidence for causes they promote. They fund the publication of journals and books, promote the production of radio and television presentations, and sponsor educational programs of all sorts in order to influence public opinion. They fund satellite organizations and advocacy groups that are able to influence political policy through appearances at legislative hearings, by direct lobbying of legislators, and political action of various sorts. . . .

All of these efforts are framed in terms of a disinterested concern with bringing to bear the best information on any question. As a consequence the major foundations play a major role in defining what are and what are not important issues and who are, and who are not, reputable contributors to speak to those issues.

The people invited to their conferences almost invariably share a concern with the issues addressed and much more often than not share a similar worldview. Almost all are highly educated, most are leaders in their fields and most are comfortable financially. Furthermore, the directors of large foundations move freely back and forth from positions in academia, politics, industry, and advocacy groups. They are, in short, the sorts of people almost always identified as elites. (pg. 47-48)

Prof. Roth gets into specifics as well:

The Ford Foundation, in particular, has been particularly generous in this regard. In the last decades of the 20th Century, Ford contributed $18 million to MALDEF, $10 million to La Raza [recently renamed "UnidosUS"], $6.5 million to the ACLU, and millions to dozens of similar pro-immigration organizations. The Bill and Melinda Gates Foundation (currently the largest American foundation) has, since 2000, given more than $26 million to the National Council of La Raza. Contributors to MALDEF and La Raza include many major foundations and a host of American Corporations. MALDEF had a total income of almost $6 million in 2004. La Raza had income of more than $42 million in 2007, including $11.5 million in the form of federal grants.

Billionaire George Soros has established and funded the Open Society Institute (OSI) that operates over 30 branches worldwide. The focus of much of its funding deals with the treatment of minorities and especially the status of Muslims in Europe. It carries on major research programs dealing with immigrant issues and files various lawsuits against governments that it claims violate the provisions of the European Court of Human Rights or the United Nations’ Convention on Refugees. Soros Foundations spent more than $417 million in 2006 supporting various programs and initiatives.

Business and industrial organizations spend vast sums in lobbying efforts to increase legal immigration and special (H-1B) visas for educated workers. In particular, they oppose limiting illegal immigration, and especially oppose making the use of E-Verify mandatory. The E-Verify citizenship verification system allows employers to check the social security status to screen for illegal aliens. It is now used voluntarily “by some 92,000 employers with a 99.5% accuracy rate.” That this system was never made mandatory by Congress speaks clearly to the power of business lobbies to assure a steady supply of inexpensive labor.

In a truly eye-opening report, Eric Ruark, senior researcher at FAIR (Federation for American Immigration Reform), has documented the huge funds expended by the hospitality, construction, agricultural, financial, technology industries and a host of others that have a clear economic interest in efforts to influence legislation relating to immigration. Ruark documented these efforts related to three bills in the period between 2006 and mid-2008, that would have among other things granted amnesty to the estimated 13 million illegal aliens, increased dramatically the number of H-1B guest workers and would have eliminated the E-verify program. In all, $345 million were expended in lobbying efforts in support of just these three bills. The United States Chamber of Commerce spent $44 million during this short period of time, the Business Roundtable $10 million, the Financial Services Round- table $7.5 million and the Associated Builders and Contractors $4 million. Individual corporations joined the effort. The Altria Corporation spent $23 million, Exxon-Mobil $12 million and IBM $8 million. Just about every major corporation is on the list and significant numbers of educational and medical organizations are included. (pg. 48-49)