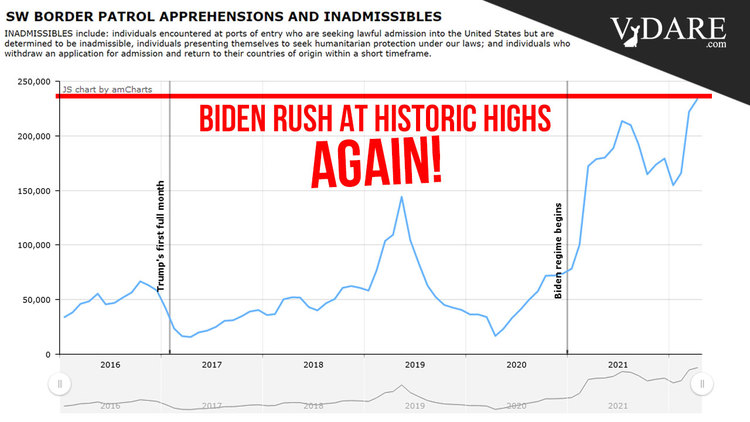 The latest Southwest Border numbers are out from the Border Patrol Website,  and they are once again enormous:

They are not only enormous, they are, as the Center For Immigration Studies points out, the highest numbers ever:

This was written before the website was updated, but as Robert Law pointed out, we already knew the numbers:

We are more than halfway into May and yet U.S. Customs and Border Protection (CBP) hasn’t updated its Southwest Land Border Encounters page with April’s figures — despite this data being readily available. The Department of Homeland Security (DHS) has utilized this delay tactic throughout the Biden administration in an effort to hide the full extent of its border crisis from the American people.

In October of last year, I noted that they were releasing them on the "fourth Friday of a five-Friday month." That's typical:

So how do I know April’s figures are record-setting bad? Thanks to a court-mandated monthly filing in Texas v. Biden, we learn that CBP “encountered” (read: arrested or apprehended) 234,088 illegal aliens at the Southwest border last month, a roughly 6 percent increase over March’s 221,303 encounters, which at the time was the worst month ever recorded. To put these numbers into perspective, we now have consecutive months setting the all-time border apprehension record and four total months above the 200,000 threshold already in the Biden administration’s first 16 months (the others being July (213,593) and August (209,840) in 2021). Prior to the Biden administration, border apprehensions last exceeded 200,000 in March 2000 (220,063), a time that precedes the creation of DHS.

[April’s CBP ‘Encounters’ at the Southwest Border Highest Number Ever Recorded
More than 1.2 million illegal aliens apprehended in FY 2022 as the end of Title 42 quickly approaches, by Robert Law, CIS.org, May 17, 2022]

No matter how bad it is now, Robert Law points out that if Trump's Title 42 is cancelled, it will get much worse:

And what exactly will the White House response be should Title 42 go away? The administration’s "plan", if you can call it that, is to more quickly process aliens out of DHS custody and reclassify them as “asylum seekers”. Mark Krikorian accurately summed it up as, “What that means is that the White House plan for dealing with the surge of new illegal immigration — which will come on top of the existing historic surge of illegal immigration — is not to halt the surge but to launder it by granting asylum immediately to virtually all those who jump the border.”

March’s border numbers were historically bad. April’s were even worse. The Biden administration is doing everything it can to lift Title 42 in the coming days. It once seemed inconceivable that we would ever have 200,000 apprehensions in a month, but with the Biden administration doubling down on its failed policies is it possible that we may cross 300,000 illegal-alien apprehensions in a month before the end of summer?

You know what that means? It means that the Mexican illegals already in this country, in Texas and the Southwest, will find that they are being "replaced" by newer and cheaper illegal labor.