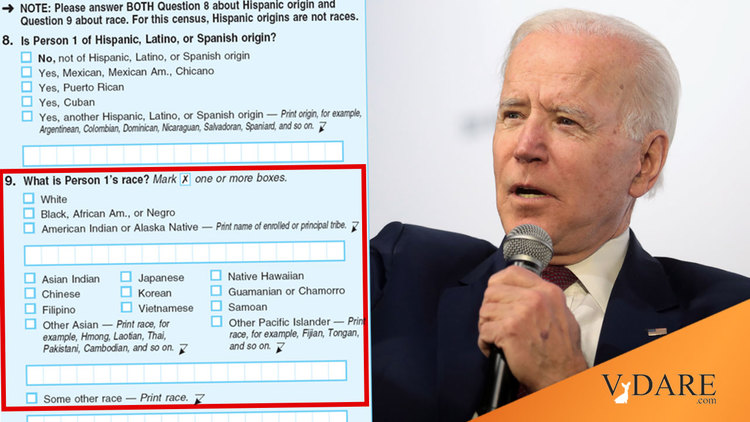 The federal government is taking preliminary steps toward revising racial and ethnic classifications that have not been changed in a quarter century following calls for more accurate categories for how people identify themselves in federal data gathering.

The revisions could open the door to changes long desired by advocates on census and survey forms. Among them are a new category for people of Middle Eastern and North African descent who currently are classified as white

Isn’t it noble and self-sacrificing of Arabs and Levantines to want to give up all that White Privilege?

and efforts to make categories less confusing for Hispanic participants. …

The review will wrap up by summer 2024 after getting input from government experts across agencies and public feedback, according to the chief statistician. That date would be months before a presidential election that could lead to a stop to any revisions if there’s a change in administrations. Momentum for changing the classifications grew in the years leading up to the 2020 census, but it was halted after then-President Donald Trump took office in 2017.

It would be interesting to know if the Biden Administration has actually calculated whether creating a Middle Eastern & North African race would be good for the Democrats. Or are they doing this just because Middle Eastern & North Africans are less white than other official whites, so therefore they are Good and the Biden Administration likes doing good things for Good groups.

I’ve tried to think through the consequences. The most obvious one is that MENAs would be eligible for certain kinds of affirmative action, such as government contracting preferences and low interest SBA loans.

But the broader consequences seem hard to predict.

The huge question is whether the creation of a MENA category would lead to lots of Jews opting out of the white category and all that sweet white privilege like not being eligible for affirmative action. Whether Jews would be MENAs is an obviously important question, but not one I’ve ever seen anybody advocating for the creation of a MENA racial category bother to answer.