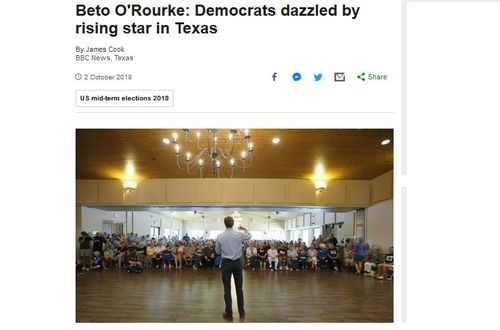 BBC: In Texas, Politics Is Downstream From Demographics

Democrats are giddy because Ted Cruz is struggling in his re-election campaign. Yet Beto O'Rourke is less the candidate of the Democrats than of the media, who have been running one puff piece after another in an attempt to take down the hated Cruz. A typical example comes from the BBC. This piece is more honest than others because it admits that O'Rourke has a chance of victory because Texas is slowly being transformed into a part of Mexico.

Mr O'Rourke, who has represented El Paso and its surrounds in the US House of Representatives since 2013, is running for the Senate - and you can't fault him for effort.

"Everyone is welcome," he smiles to the packed audience, insisting that the invitation even extends to "the dude in the Make America Great Again cap".

For today at least, the offer is rhetorical.

There are no red-and-white Donald Trump hats in sight and, one suspects, precious few anywhere in Hidalgo County, where Edinburg bakes in the Rio Grande Valley, just north of the Mexican border.

This is deeply Hispanic, deeply Democratic territory. You can spend a long time here before you hear a word of English.

Texas is changing, becoming more urban and less white, and assuming Mr O'Rourke can generate a high turnout among his base, a liberal victory in the Lone Star State no longer looks impossible, which in itself is pretty remarkable.

Of course, there's nothing remarkable about it. "Texas" is a place; Texans are a people with something close to a national consciousness. However, if they are simply replaced by Mexicans, Texans will be dispossessed and Texas will be just another part of the Third World. After all, California used to be the bedrock of the conservative movement, but mass immigration turned it into practically a one party state.

Ted Cruz has been telling voters this campaign not to let them turn Texas into California. Well, the only way to do that is to stop mass immigration. Unfortunately, much of the damage has already been done.

They have to go back!