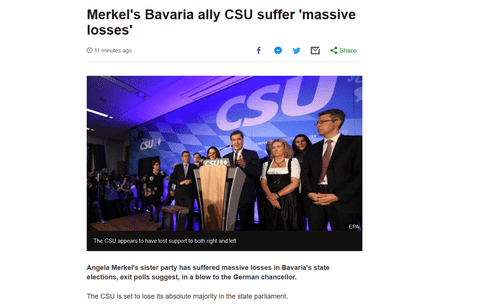 Angela Merkel continues to pay the political cost for her decision to open Germany's borders, as the center continues to collapse in Germany. The Christian Social Union, a Bavarian party in coalition with Angela Merkel's Christian Democratic Union, appears to have lost its absolute majority.

The hard Left is growing in Bavaria, but so is the patriotic Right.

The CSU is set to lose its absolute majority in the state parliament.

The Greens surged into second place and the anti-immigration AfD entered the state parliament for the first time.

The CSU has ruled Bavaria almost single-handedly since 1957, but has lost support as opinion becomes polarised over issues like migration.

Exit polls for major broadcasters said the CSU (Christian Social Union) won about 35.5%, down 12 points on four years ago, with the left-leaning pro-immigration Greens on 19%.

The Alternative for Germany (AfD) came fourth with 11%, behind a collective of independent candidates known as the Free Voters.

The AfD's success in Bavaria has not been as great as in eastern Germany, but it appears to have taken large numbers of votes from the CSU.

This should not be taken as a triumph for the nationalist Right. Obviously, the hard Left is on the march and there is a significant boost overt support for mass immigration. However, given the hysteria in the German media over the growth of the AfD, it's likely much of this is simply an "anti-Right" vote as opposed to support for immigration per se. Like in America, support for immigration tends to correlate with hatred for the actually existing citizens of your country.

On the bright side, it is no small thing the AfD will outperform the Social Democrats, the center-left part that is a part of Merkel's Grand Coalition. Indeed, as the center continues to collapse, one suspects Grand Coalitions may be harder and harder to put together. Immigraiton is changing the old party coalitions not just in America, but throughout the world.