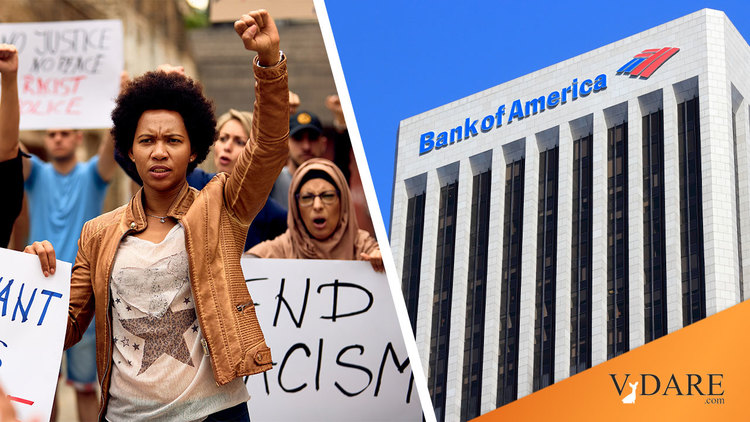 Previously on SBPDL: When Race Isn’t a Social Construct, But Something to Bludgeon White People with on a Never-Ending Basis: Coca-Cola Forces Employees to “Try to be Less White”

So how long until Bank of America tells employees (or mandates) to give 10 percent of their holdings to people of color? Perhaps 20 percent of the equity in their home to blacks as a way to engage in true… equality of equity.

Wouldn’t this be the true way to reject the “smog” (their word) of white privilege?

Bank of Amerika: The financial giant teaches that the United States is a system of “white supremacy” and encourages employees to become “woke at work,” City Journal, August 18, 2021

Bank of America Corporation has implemented a racial reeducation program that claims the United States is a system of “white supremacy” and encourages employees to become “woke at work,” instructing white employees in particular to “decolonize [their] mind[s]” and “cede power to people of color.”

Earlier this year, Bank of America’s North Carolina and Charlotte market president Charles Bowman announced a new “equity” initiative called United in Action, in partnership with the United Way of Central Carolinas. According to documents I have obtained from a whistleblower, BOA executives launched the initiative by encouraging employees to participate in their “Racial Equity 21-Day Challenge,” a race-training program funded in part by the bank and built on the principles of critical race theory, including intersectionality, white privilege, white fragility, and systemic racism.

On the program’s first day, Bank of America teaches employees that the United States is a “racialized society” that “use[s] race to establish and justify systems of power, privilege, disenfranchisement, and oppression,” which “give[s] privileges to white people resulting in disadvantages to people of color.” According to the training program, all whites—“regardless of one’s socioeconomic class background or other disadvantages”—are “living a life with white skin privileges.” Even children are implicated in the system of white supremacy: according to the program materials, white toddlers “develop racial biases by ages three to five” and “should be actively taught to recognize and reject the ‘smog’ of white privilege.”

Over the next three days, Bank of America teaches employees about intersectionality, unconscious bias, microaggressions, and systemic racism. “Racism in America idolizes White physical features and White values as supreme over those of others,” the program asserts. As a result of being part of the “dominant culture,” whites are more likely to “have more limited imagination,” “experience fear, anxiety, guilt, or shame,” “contribute to racial tension, hatred, and violence in our homes, communities, and world,” and, subsequently, “react in broken ways as a result.” People of color, on the other hand, cannot be racist, because “racism is used to justify the position of the dominant group . . . and to uphold white supremacy and superiority.” Therefore, the discussion guide claims, “reverse racism and discrimination are not possible.”

In days seven through sixteen, Bank of America covers a laundry list of progressive concepts and policy priorities, including “microaggressions,” “racial trauma,” “the abolishment of the police,” “the school-to-prison pipeline,” and “environmental justice.” The training program claims that racist microaggressions can contribute to post-traumatic stress disorder in black Americans and that “racism can be just as devastating as gunfire or sexual assault.” America’s economy is described as a “caste system” with “African Americans kept exploited and geographically separate.” The American policing system, according to the materials, was founded on “slave patrols whose task was to capture, control, and brutalized enslaved people”; this system is “woven into the DNA” of American society and, according to the activists in the training module, can be solved only through “the defunding and even the abolishment of the police.”

In the program’s final days, BOA encourages employees to become “woke at work” and practice “allyship.” Participants must admit that “[their] words and actions are inherently shaped and influenced by systemic oppression” and must commit to doing “the inner work to figure out a way to acknowledge how [they] participate in oppressive systems.” After they have addressed their complicity in racial oppression, employees are encouraged to engage in the actions of “building a race equity culture.” A worksheet provides specific instructions, including: “decolonize your mind”; “accept that white supremacy and institutional racism are real”; “challenge white dominant cultural norms”; and “cede power to people of color.”

Yes, Bank of America wants its employees to engage in actions of “building a race equity culture” and “cede power to people of color.”

These people of color don’t need your ATM passcode… yet. That comes later.

Race, we are told, is a social construct. Yet every institution–public or private–in America is dedicated to promoting the anti-white mindset on a 24/7/365 basis.

Race is very, very real. Equality is the social construct. Thus the sole reason why every institution perpetuates anti-white hatred.