This year, the 15th anniversary of Islam’s jihad attack on New York City and Washington falls on the same day as Eid al-Adha, (aka the feast of the sacrifice) as a result of the lunar calendar. The Muslim media squad has jumped on the coincidence, pretending to be frightened of gangs of angry Americans looking for payback: Backlash!

As if! We all remember who murdered 3000 Americans on that awful day, but lynchings or other violence against the perp tribe by citizens are unlikely because we are a law-abiding people.

In the real world, TheReligionOfPeace.com keeps track of relevant stats, and the number deadly terror attacks since 9/11 as of today, September 2, 2016, is 29,141. The thirty-day count of dead from jihad today is 1223.

So the attempt of Muslims to portray themselves as victims falls short. But they keep trying, because the diversity-crazed media keep responding by printing the stuff.

Muslims are known to enjoy their colorful sacrifice holidays, as shown below. 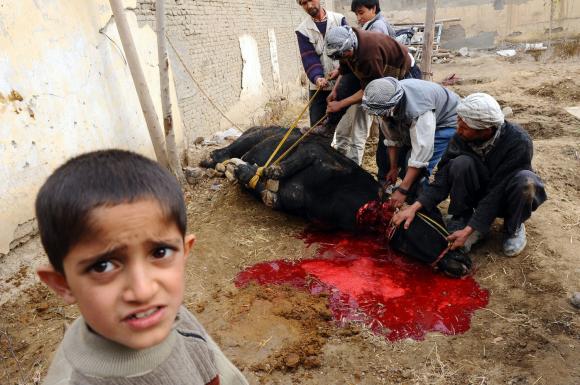 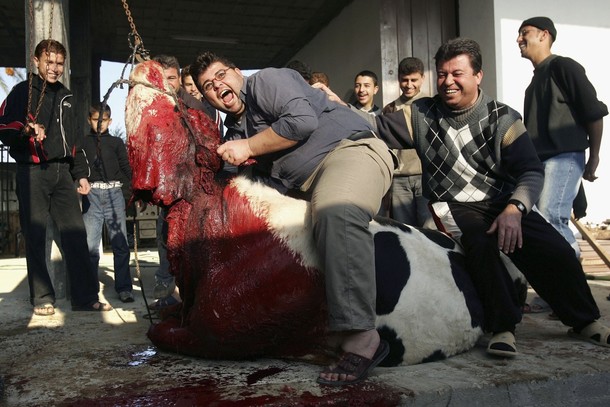 In fact, a recent instance of Muslims being shot down in America were the two jihadists carrying AK-47s about to attack a free speech event in Garland Texas. They were killed by a local police officer with his service revolver during a shootout the Muslims initiated.

Muslims murder for allah every day, but we are supposed to believe they are somehow victims of mean Americans. And why does the government continue to allow them to immigrate here anyway?

MUSLIMS fear they could be targeted in violent attacks as the holy day of Eid could fall on 11 September for the first time since 9/11.

Eid al-Adha, also known as the feast of the sacrifice, is the holiest Muslim celebration.

But this year’s celebration could fall on the 15th anniversary of the terror attacks on New York and the Pentagon which killed 2,996 people and injured 6,000.

The date of the religious celebration is determined by the lunar calendar and is set by academics.

The celebration has fallen close to 9/11 in previous years but has never arrived on the same date of the attacks.

The Muslim Council of Britain said the date-clash would be “completely coincidental”.

A spokeswoman for the council said: “Islamic festivals are based around the lunar calendar, and so each month starts with the sighting of the new moon.

“This year, there may be a chance that Eid falls on the 11th of September, but this would be completely coincidental as Eid falls on the tenth day of the month of Dhul Hijjah, after the completion of the Hajj pilgrimage.

“As it is a lunar calendar, there is an annual drift of 10/11 days, which means that it is not synchronised with the seasons, so Eid never falls on the same day each year.”

Former jihadi extremist Maajid Nawaz urged people to “not misinterpret” the date Eid could fall on.

Nawaz, the founder of the counter-extremism think tank Quillam, tweeted: “The Muslim festivity of Eid is determined by the lunar calendar. This year it may fall, by chance, on 9/11. Please do not misinterpret this.”

Anti-Islamic rhetoric has seemingly grown in America, with Donald Trump’s calls to ban Muslims resonating with his fan base.

Earlier this year, Trump called for a “total and complete shutdown of Muslims entering the United States”.

Just yesterday, Trump doubled down on his pledge, saying he would stop anyone from Libya or Syria entering the US.

Robert McCaw, director of government affairs at the Council on American-Islamic Relations, said: “It’s on the minds of every Muslim leader in the country right now.