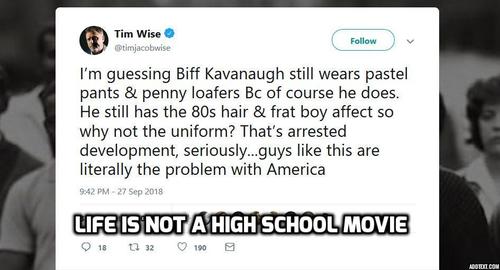 I’m guessing Biff Kavanaugh still wears pastel pants & penny loafers Bc of course he does. He still has the 80s hair & frat boy affect so why not the uniform? That’s arrested development, seriously...guys like this are literally the problem with America

Male respectable media establishment figures are using the Kavanaugh Kase to re-litigate the crucial national question of who deserved to have gotten the blonde girlfriends back in high school.

(Rodney Dangerfield’s “Back to School” is pretty funny when Rodney’s onscreen, but how’d they come up with casting the little forgotten dweeby guy as Rodney’s son, when they had Robert Downey Jr. as the son’s friend? How many younger actors have had their careers wrecked by getting a big role but then having somebody better than you cast in a supporting role?)

But one new show battles desperately to bridge the national chasm left by 1980s teen movies: