Here’s a little intro to specific robots, each with their own abilities, based upon the writer’s visit to a robot conference. Of those, the OSHbot and Baxter have already been examined in these pages.

Below, Orchard Supply Hardware (OSH) has been moving forward with a greeter robot that can also direct shoppers to desired gizmos in the store. 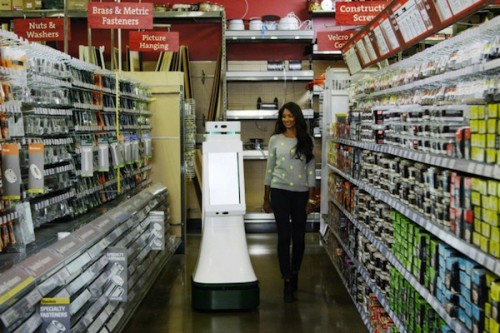 Robots and automation are coming on like gangbusters, yet Washington policymakers are snoozing through the social/economic earthquake. Headline: there’s no worker shortage coming because of boomer retirement. Instead, the jobless recovery portends the true future, only unemployment will increase in the long term because of the smart machine revolution. When a manufacturer can purchase a Baxter robot for $22,000 and operate it for $3/hour, why wouldn’t he buy several to cut costs?

In short, America won’t need millions of immigrants to do nonexistent jobs. The sooner we get to ZERO immigrants, the better it will be for working Americans of all skill levels, from blue collar to professionals.

While the world’s most advanced robots are still trying to master stairs (and karate), there will come a time when many jobs currently held by humans are done by robot workers. Quartz met four robots at the RoboUniverse conference in New York earlier this month that are already doing some jobs that previously would have been done by humans.

Every other assembly line worker

Rethink Robotics’ Baxter robot can be programmed to perform a range of complex manual tasks on the assembly line. Rather like a small child or a dog, someone can show Baxter how to do a task and then it will copy the actions. There could soon be a future where the only humans needed on the factory floor are the ones who teach the robots to complete tasks—until the robots can teach themselves. Rethink told Quartz its next generation robot, called Sawyer, will take up less space and won’t have such a disinterested look on its face.

RoboKind’s Milo robot has been helping kids with autism understand social cues and emotions at schools around the US. Richard Margolin, RoboKind’s engineering director, told Quartz that Milo can also be used to teach yoga classes, and is being tested out for use in elderly care. Milo has run classes in senior homes, and successfully been used to help the elderly stay engaged and sharp, Margolin said.

Orchard Supply Hardware’s OSHBot can lead customers to any item in the store, and never forgets where anything is. Customers can also show OSHBot an item, like a screw, and ask where they can find more, and the R2-D2-like robot will escort you to their location. It can also learn to speak multiple languages, which most clerks can’t do, at least without going back to school.

Robots themselves aren’t even safe from the chopping block. The Ragnar Robot is a reprogrammable robot from Blue Workforce that can be used by small businesses to do pretty much whatever they need. Blue Workforce’s CEO Preben Hjørnet told Quartz that the Ragnar could be 3D printing out surfboards in the morning, and then reconfigured to stock them on the shelves of a surf shop in the afternoon. Watch out Baxter: The Ragnar is coming for you.