A version of this video showed on a daytime news show in northern California on Monday:

Interestingly, the company came out with the major selling point of robots, that they are cheaper than human employees who want paychecks, lunch breaks and benefits. The Youtube channel is CGTN, aka China Global Television Network, which may not be as delicate in discussions of deleting workers. 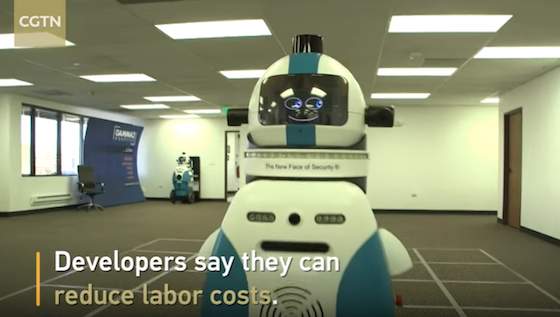 The cost of the machine is $65,000 and it is estimated to have a lifespan of three years. That’s pretty cheap when you remember that the machine works 24/7 and presumably needs only the rare break for minor tune-ups and squirts of oil.

The Bureau of Labor Statistics noted in May 2016 that 1,103,120 persons were employed as security guards and the mean annual wage was $29,730. Has anyone told these workers they’re about to be phased out?

It should be mentioned that another robot security guard from the Knightscope company is already available and was seen working in San Francisco in 2016.

Given that security guard is a low-skilled job and requires just a basic knowledge of English, it is an occupation that attracts immigrants. But the rapidly automating workplace means that continuing to import over a million foreigners every year is a bad idea. Low-skilled jobs will be among the first to be eliminated over the next few years as automation really gets going in the workplace. Washington needs to wake up and smell the software.

The company building the Ramsee machine, Gamma 2 Robotics, emphasizes the cost savings on its front page:

The Future of Robotic Security is Here!

Imagine a deep technology that keeps people, property and businesses safer than ever. Imagine real time data being transmitted and used to help people make better decisions, on location or even remotely.

Introducing our new security patrol robot, RAMSEE, who will change the world of security because he never rests and he operates at a fraction of the cost normally paid for cameras, technology and guard services.