I’ve reported earlier about the robot security guard. The Knightscope machine is a 300-pound snoop-bot that scoots around parking lots, recording license plates and other useful data.

What interesting about a recent report from Fusion is the information about the machine’s inexpensive cost — only $7 per hour for the standard rental, which is a lot cheaper than hiring a worker. That low pricetag will be attractive for the right kind of business that wants just the basic observer unit for a parking lot or similar environment.

The robot was seen rolling around the Uber parking lot in San Francisco, so the machines are being adopted in real situations today. That fact illustrates how the replacement of human workers by machines is not a distant future event but is a present reality that will likely increase going forward.

Keep in mind that the expanding use of smart machines to replace human workers means that the government’s continued importation of foreign workers via immigration is very unwise. The number of adult citizens not having a job hit a record high in May, specifically 94,708,000 Americans absent from the labor force. Oxford University researchers estimated in 2013 that nearly half of US jobs were vulnerable to computerization within 20 years. The Gartner technology consultants predicted that one-third of US jobs will be done by a computer or robot by 2025.

With that dire employment future predicted by experts, the correct immigration policy should be reduction to zero. US business won’t be needing millions of cheap foreign workers because the machines will be even cheaper.

Uber hired a robot to patrol its parking lot and it’s way cheaper than a security guard, Fusion, July 5, 2016

Uber drivers who pay a visit to the company’s inspection lot near Mission Bay in San Francisco will be met with a rather strange sight: a five-foot-tall, white, egg-shaped robot wheeling around the lot, on the look-out for trouble.

The robot is a K5, a 300-pound security robot made by Silicon Valley start-up Knightscope. It’s a stand-in for a human security guard. Stacy Stephens, Knightscope’s VP of marketing, says Uber is a recent customer of the company. The bot was spotted by friend of Fusion, Alan Sanchez, who stopped to take a photo of the bot and found that when he did, the robot stopped moving around to focus its stare on him: 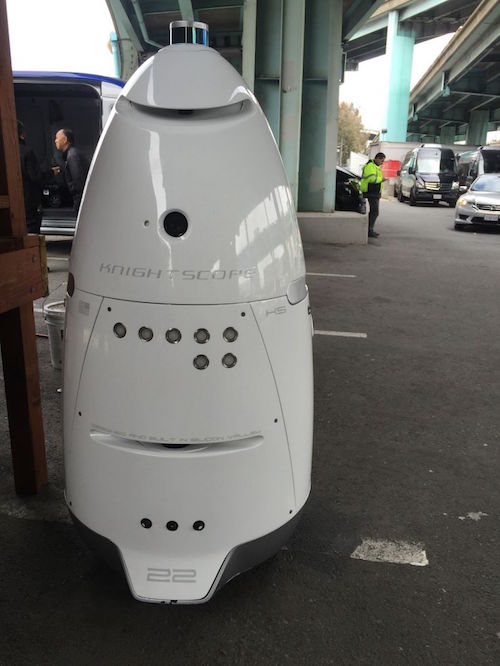 The robot has multiple high-definition cameras for 360-degree vision, a thermal camera, a laser rangefinder, a weather sensor, a license-plate recognition camera, four microphones, and person recognition capabilities. Once set up in a geofenced area, “it roams around looking for anomalies,” said Stephens.

If someone suspicious comes into the lot, or starts messing with a car, the robot can’t tase them or break out any weapons. (It may look like a Dalek but it’s less lethal.) Instead the robot can set off an alarm, send a signal to human security personnel, and record everything that person does to be used against them later by police.

Knightscope customers don’t buy the machines. They rent them, usually two at a time, so one can charge its battery while the other patrols. The cost is $7 an hour.

“For the cost of a single-shift security guard, you get a machine that will patrol for 24 hours a day 7 days a week,” said Stephens, citing wages of $25 to $35 hour for a human security guard. Stephens said two large security companies have already signed deals with Knightscope. The robots are coming for our jobs. Sorry humans!

The financial appeal is obvious. And if the robot gets beat up by a bunch of kids, which kids seem to enjoy doing, you don’t have to pay it workman’s comp. (They may not be the last Uber jobs to go to the bots.)