Automation: Robots Are the Next Generation of Farmworkers

It’s good to see traditional media connect the dots between automation and immigration, as the Los Angeles Times inadvertently did somewhat on Tuesday’s front page: 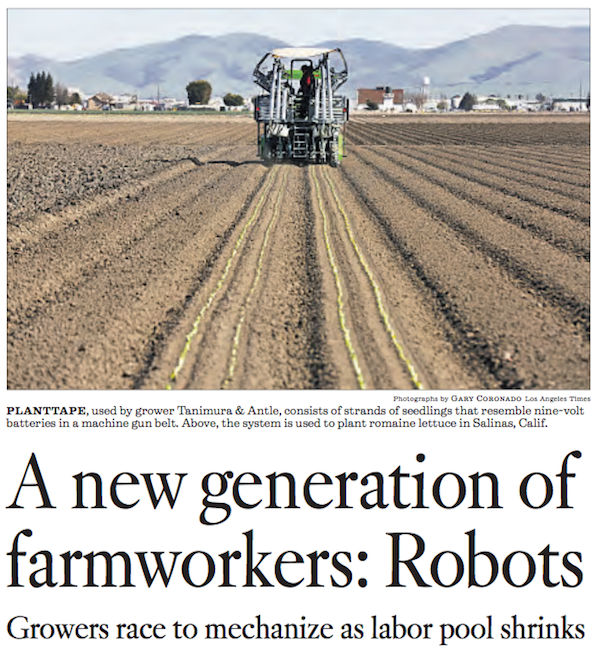 The online version of the article appeared last week, on Friday, July 21. An above-the-fold story with photo gets a lot more attention, certainly, as long as those newspaper boxes are sitting on the sidewalk.

The missing part of the message is that the machines make importing foreign farmworkers increasingly unnecessary. If fewer illegals are crossing the border because of Trump, that may hasten smart machines in the fields, but ag robots are coming sooner or later: when the machines become cheaper than human pickers, then field workers will be gone, period.

Plus, it’s long past time that Mexico etc. became more responsive to its own people’s needs, rather than pushing them north to mooch from America.

Can we get Washington to notice that the world of work is changing fundamentally?

Driscoll’s is so secretive about its robotic strawberry picker it won’t let photographers within telephoto range of it.

But if you do get a peek, you won’t see anything humanoid or space-aged. AgroBot is still more John Deere than C-3PO — a boxy contraption moving in fits and starts, with its computer-driven sensors, graspers and cutters missing 1 in 3 berries.

Such has been the progress of ag-tech in California, where despite the adoption of drones, iPhone apps and satellite-driven sensors, the hand and knife still harvest the bulk of more than 200 crops.

Now, the $47-billion agriculture industry is trying to bring technological innovation up to warp speed before it runs out of low-wage immigrant workers.

California will have to remake its fields like it did its factories, with more machines and better-educated workers to labor beside them, or risk losing entire crops, economists say.

“California agriculture just isn’t going to look the same,” said Ed Taylor, a UC Davis rural economist. “You’re going to be hard-pressed to find crops grown as labor-intensively as they are now.”

Driscoll’s, which grows berries in nearly two dozen countries and is the world’s top berry grower, already is moving its berries to table- top troughs, where they are easier for both humans and machines to pick, as it has done over the last decade in Australia and Europe.

“We don’t see — no matter what happens — that the labor problem will be solved,” said Soren Bjorn, president of Driscoll’s of the Americas.

That’s because immigrant farmworkers in California’s agricultural heartlands are getting older and not being replaced.