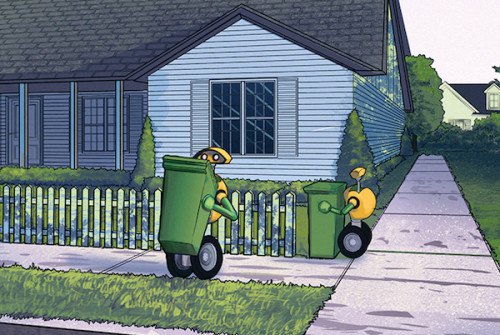 The Volvo company is busy developing robots to replace human garbage collectors, the fellows who move the trash containers from the curb and dump them into the truck. 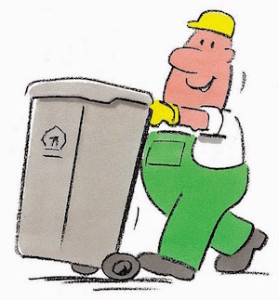 As usual, the company portrays the proposed machines as quieter and more efficient. What they are is cheaper than paying humans.

It’s hard to sort out whether smart machines are worse for white collar jobs or blue. The replacement of physical labor jobs is more obvious because robots on factory floors are hard to miss. Meanwhile, better software is certain occupations, like accounting, decreases the number of humans required in office jobs, so the reason for the reduced employment is less obvious. The sad fact is that both mental and physical jobs are threatened by robots, automation and computers.

Incidentally, there is plenty of advice online about what college-educated people should do to enhance their skills in a way that will make them better able to withstand the automation onslaught. However there is little discussion about what blue-collar workers can do to remain financially viable in the post-human work environment.

Furthermore, with nearly half of American jobs threatened to be replaced by automation in less than 20 years according to Oxford University researchers, the need for additional immigrant workers is ZERO.

Robots Are Coming for the Garbageman’s Job, Popular Science, September 17, 2015

Let the Machines Do the Heavy Lifting

As long as there are humans, there will be garbage. And, for a long time, it seemed inevitable that there would always be garbagemen, too, to collect that refuse. A new project by carmaker Volvo, recycling company Renova, Sweden’s Chalmers University of Technology and Mälardalen University, and Penn State University wants to create robot assistants for garbage trucks. With automation, a human driver can stick to the road, and a robot can do the literal heavy lifting.

Dubbed Robot-based Autonomous Refuse handling, or ROAR, the project will feature a robot designed by Mälardalen University, control system designed by Chalmers University, and a control panel designed by Penn State. Combined, these efforts will hopefully yield a robot that can grab trash and toss it on board a Renova waste truck by June 2016.

Volvo’s release on the matter suggests the purpose behind ROAR is a system that collects garbage “without waking the sleeping families and without heavy lifting for the refuse truck’s driver,” but there’s little evidence yet that humanoid robots or quieter or more graceful than actual humans. In terms of cost, robots can certainly be cheaper than people, if the same already-employed driver is now also responsible for steering a pair of robots instead of waiting for a couple people to hop off, grab trash, and get back on.

But that assumes waste collection companies will even still want human drivers in the future. If they’re looking to completely automate the garbage collection process, the next step is to hand the keys over to a robot.