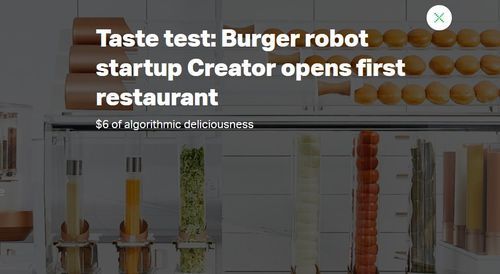 Hamburger automator Alexandros Vardakostas has opened his long anticipated restaurant and now presents himself as the cheerful, welcoming entrepreneur in the video below:

But in 2012, he was quoted in Xconomy saying, “Our device isn’t meant to make employees more efficient; it’s meant to completely obviate them.”

Vardakostas was just saying what many business owners think, namely that employees are expensive, troublesome and sometimes don’t show up for work. The restaurant of the future will be far more automated, and we see that trend already in the numerous ordering kiosks showing up in McDonald’s and elsewhere.

The Creator restaurant in San Francisco has gone for a sleek techy look. 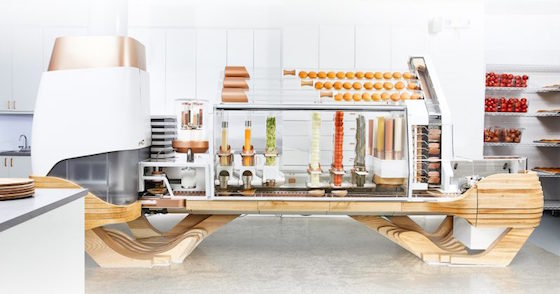 The jobs economy is booming now, but before long, the machines will begin to replace human workers to a noticeable degree. In fact, some businesses are looking at automation now because they cannot find the workers they want at the wage they are willing to pay.

Fast food work has been a good place for teenagers to start out and learn the basics of having a job, so they will lose out from the coming automation.

The restaurant workplace has been amenable to foreigners who have few skills and may not speak English, but continuing to import thousands of low-skilled immigrants is unwise when many jobs are likely to disappear soon.

Vardakostas is apparently planning on having lots of automated burger restaurants in his future, judging from his remarks in the article below:

Creator’s transparent burger robot doesn’t grind your brisket and chuck steak into a gourmet patty until you order it. That’s just one way this startup, formerly known as Momentum Machines, wants to serve the world’s freshest cheeseburger for just $6. On June 27th, after eight years in development, Creator unveils its first robot restaurant before opening to the public in September. We got a sneak peek…err…taste.

When I ask how a startup launching one eatery at a time could become a $10 billion company, Creator co-founder and CEO Alex Vardakostas looks me dead in the eye and says, “the market is much bigger than that.”

Here’s how Creator’s burger-cooking bot works at its 680 Folsom Street location in San Francisco. Once you order your burger style through a human concierge on a tablet, a compressed air tube pushes a baked-that-day bun into an elevator on the right. It’s sawed in half by a vibrating knife before being toasted and buttered as it’s lowered to conveyor belt. Sauces measured by the milliliter and spices by the gram are automatically squirted onto the bun. Whole pickles, tomatoes, onions and blocks of nice cheese get slices shaved off just a second before they’re dropped on top.

Meanwhile, the robot grinds hormone-free, pasture-raised brisket and chuck steak to order. But rather than mash them all up, the strands of meat hang vertically and are lightly pressed together. They form a loose but auto-griddleable patty that’s then plopped onto the bun before the whole package slides out of the machine after a total time of about five minutes. The idea is that when you bite into the burger, your teeth align with the vertical strands so instead of requiring harsh chewing it almost melts in your mouth.

If you want to be the first to try it, Creator is selling early access tickets at 10am Pacific today. Otherwise it will be open for lunch Wednesdays and Thursdays until the public launch. Eventually, an app will let people customize the exact ratios of all the ingredients, unlocking near infinite permutations.

For now, the startup’s initial pre-set burger options include the classic-style Creator vs. The World with a mole Thousand Island special sauce, the oyster aioli Tumami Burger designed by Chef Tu of Top Chef, The Smoky with charred onion jam and the sunflower seed tahini Dad Burger from Chef Nick Balla of Bar Tartine.