Big changes are planned for the nation’s transportation, although the citizens have not been consulted about whether they want private ownership of cars to be pushed to the side as the government plans for a system of self-driving cars hooked up to enormous computer networks.

Not that long ago, self-driving cars were just a spark in Sergei Brin’s mind, and were thought by many automation experts as something to occur in the distant future, if at all. 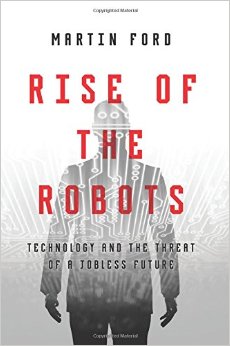 As Martin Ford, author of “Rise of the Robots: Technology and the Threat of a Jobless Future” remarked during a radio interview in March:

Ford: All of this [technology] is subject to a continuing acceleration, and for that reason, it’s going to unfold at a rate that may surprise us. To take the example of driverless cars: It’s just a few years ago — really, back in 2009 — that I wrote my first book on this topic, and I never imagined at that time that driverless cars would be feasible any time soon. It seemed like an almost impossible task, even to me. Yet now, virtually every auto manufacturer, as well as a whole bunch of companies that haven’t traditionally been in the car industry, are working on this, and it’s looking like it’s going to be feasible within 10, 15 years, at least. So it’s pretty amazing how fast things are moving.

At some point, the major car manufacturers figured out that automation technology was going forward and they should get on board in order to shape events to their advantage. That viewpoint was made clear in a Senate hearing where one of the expert panelists was an executive from General Motors (Hands Off: The Future of Self-Driving Cars, March 15, 2016).

One sign of elite approval is government money: Obama Plans to Spend $4 Billion to Speed Development of Self-Driving Vehicles. The excuse, er reason was given that automated autos will be a swell government solution to worsening traffic problems (caused by unsustainable immigration and subsequent overpopulation):

SECRETARY OF TRANSPORTATION ANTHONY FOXX: “We are on the cusp of a new era in automotive technology with enormous potential to save lives, reduce greenhouse gas emissions, and transform mobility for the American people. Today’s actions and those we will pursue in the coming months will provide the foundation and the path forward for manufacturers, state officials, and consumers to use new technologies and achieve their full safety potential.” (Gizmodo).

There are a lot of problems with this utopian roadmap of the future, yet it is moving full speed ahead because elites want it. What about the estimated 3.5 million Americans who drive trucks for a living? Rejiggering the transportation sector entirely will cause all sorts of pain, such as inconvenience to commuters as daily kinks get worked out, assuming they can be.

The upshot of the big tech plan is that self-driving cars will be joined together in a government-run network which will make a vehicle appear on demand when an individual calls for one — which sounds like quite a tall order even if the technology can be made to work. Cars are a lot about freedom in American culture, but the government thinks private car ownership needs to be pruned back to reduce roadway crowding, and a networked robot car system is what the big brains cobbled together.

Most citizens have no idea that this monstrous experiment is about to be foisted upon them, yet it is in the pipeline, unless the system fails or the people just reject it. The first step is to try out the technology at the city level, and the Smart City Challenge sponsored by the Department of Transportation is a way to kickstart that process with a pile of money.

One good thing about self-driving cars would be that rude foreign cabbies become obsolete and no more of them would be imported. . . right?

Can a city switch entirely to driverless cars? CNN Money, May 31, 2016

In ten years, will American cities still be crippled by bumper to bumper traffic and inadequate public transportation? Or will our urban centers come up with some ingenious technological solutions — and the funding to make them happen?

The Department of Transportation and major U.S. cities are betting on technology to solve their transit woes. As part of its “Smart Cities Challenge,” the DOT will give a winning city up to $40 million to help it experiment with innovative transit options. It would also be eligible for an additional $10 million from Paul Allen’s Vulcan Inc.

San Francisco, a finalist, imagines a fanciful city with an elaborate network of city-run self-driving cars and shuttles, where the on-demand businesses it’s still struggling to regulate are a seamless part of life.

The most technologically ambitious part of San Francisco’s big vision, created by the city’s new Office of Innovation, is getting people out of the driver’s seat and into shared, autonomous cars. The idea is to reduce traffic and reclaim parking structures and some roadways for housing and parks.

Existing streets will be outfitted with sensors so they can communicate with cars. Cars will be able to talk to other vehicles, orchestrating a delicate synchronized dance to minimize traffic and injuries.

The catch? The idea hinges on people selling their cars and relying on a city-run transit service. It’s a grand vision, but to convince anyone to give up their cars, the new system would need to be much faster and better executed than San Francisco’s current public transit.

San Francisco is facing a number of immediate transportation challenges. Its public transit system is underfunded and unreliable. The population is growing faster than the city can accommodate, pricing lower income residents out of the city center and saddling them with longer commutes.

Before robotic cars ferry everyone to work, San Francisco would ease people into its plan. At the heart of the first phase is an app that cobbles together a commute from an eclectic range of options.

A person can drive her electric car to a first stop, and leave it there so other people can rent it during the day. She’d hop on public transit or grab a carpool to work, use shared bikes or scooters during the day, and maybe grab a ride-sharing service home. Errands that would usually require a car, like shopping, are handled by on-demand services.

How does this fictional San Franciscan pay for all this transportation? With the money she makes renting out her car during the day, of course.

There are also vanpools, smarter maps, and lockers so that delivery trucks can drop their goods off at night when there’s less traffic.

The early plan seems to rely heavily on “gig” workers — people piecing together a living with part-time jobs running errands for on-demand services. It also sees shared vehicles as key, something multiple startups are already offering.

Even if it doesn’t win the DOT challenge, San Francisco is in a unique position to pursue the plan anyway. Some of the world’s largest innovative transportation companies are based in the city. Many are already testing their tech in the city.

San Francisco is one of seven finalist cities chosen from 78 applicants. Other finalists include Pittsburgh, Kansas City, and Austin, which also sees on-demand car services playing a big part in its future. Each of the finalists received $100,000 to refine its ideas. The winner will be announced in June.