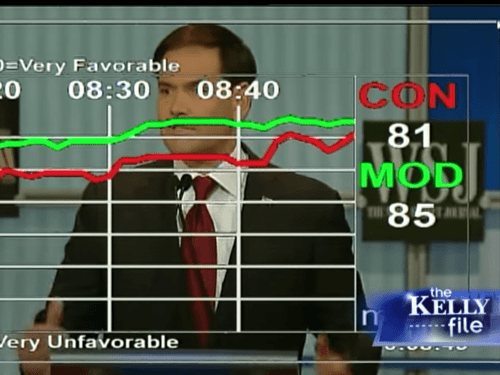 The fundamental transformation of the American workplace by smart machines has gone undiscussed in the Presidential campaign until now: one tiny mention occurred in Tuesday’s Republican debate by a man who characterizes himself as the fresh voice for the 21st century.

RUBIO:  The problem is that today people are not successful working as hard as ever because the economy is not providing jobs that pay enough. If I thought that raising the minimum wage was the best way to help people increase their pay, I would be all for it, but it isn’t. In the 20th century, it’s a disaster.

If you raise the minimum wage, you’re going to make people more expensive than a machine. And that means all this automation that’s replacing jobs and people right now is only going to be accelerated.

Wait, this was the senator who pushed hard for the evil Gang of Eight amnesty bill that would have doubled legal entrants per year in perpetuity as well as forgive millions of lawbreaking foreigner job thieves and award them with immediate work permits. Senator Jeff Sessions said that 57 million would get legal status under Rubio’s bill.

The ambitious new senator from Florida thought he would make a name for himself by creating landmark legislation that would coincidentally injure Americans who work for a living by flooding the labor market with millions of foreign workers. Now he thinks he should be president.

Rubio was an enthusiastic member of the Gang of Eight amnesty gang who worked behind closed doors to defeat enforcement.

Actually, there was also a question about robots that went to Senator Rubio but he didn’t answer it:

BAKER: Senator Rubio, Senator Rubio, let me — let me take you to a question that I think gets to the root of a lot of the anxiety that people have in this country. The economy is undergoing a transformation through information technology. Americans are anxious that the new economy isn’t producing higher-paying jobs. Many are concerned that the new wealth seems to be going mainly to innovators and investors.

Meanwhile, with factories run by robots and shopping done increasingly on smartphones, many traditional jobs are just going away. How do you reassure American workers that their jobs are not being steadily replaced by machines?

RUBIO: Well, you know, that’s an excellent question, because what we are going through in this country is not simply an economic downturn. We are living through a massive economic transformation. I mean, this economy is nothing like what it was like five years ago, not to mention 15 or 20 years ago.

Yes, Senator, we are living through a massive economic transformation, one that indicates Washington’s immigration input going forward should be ZERO, because machines will be doing the jobs.