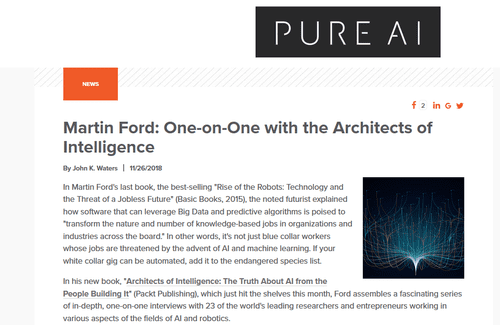 Automation: Artificial Intelligence Is Analyzed For Its Future Effects 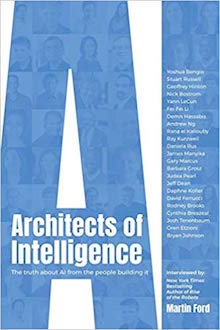 In 2015, Rise of the Robots: Technology and the Threat of a Jobless Future was published and got a lot of attention for its dire forecast that was specific and well argued. Now, author Martin Ford is back with the next chapter of advanced machines, namely artificial intelligence (AI), with the book Architects of Intelligence: The Truth About AI from the People Building It.

It’s one thing to have an automotive factory filled with robots that perform specific simple tasks very precisely. However, the next step is adding machines with intelligence, and it’s hard to tell how far it will go ultimately, but AI promises even more disruption into the world of work and the economy.

The format of the book is a series of interviews with experts in the field which is probably the most promising approach to a topic that is still experimental and open ended.

Here’s a review, with a warning in the last paragraph that is rather chilling:

In Martin Ford’s last book, the best-selling “Rise of the Robots: Technology and the Threat of a Jobless Future” (Basic Books, 2015), the noted futurist explained how software that can leverage Big Data and predictive algorithms is poised to “transform the nature and number of knowledge-based jobs in organizations and industries across the board.” In other words, it’s not just blue collar workers whose jobs are threatened by the advent of AI and machine learning. If your white collar gig can be automated, add it to the endangered species list.

In his new book, “Architects of Intelligence: The Truth About AI from the People Building It” (Packt Publishing), which just hit the shelves this month, Ford assembles a fascinating series of in-depth, one-on-one interviews with 23 of the world’s leading researchers and entrepreneurs working in various aspects of the fields of AI and robotics.

“Over the last decade, ‘AI’ has been primarily about deep learning,” Ford told Pure AI, “so I made sure to include the most prominent people I could find working on that technology. But I also picked a number of people who have been critical of it, as well as people researching other areas, such as emotional AI, and some people with serious entrepreneurial ambitions.”

Many of the interviews included in this book are high-level conversations with extremely smart engineers and scientists about a topic some readers might feel is beyond them. But even the techie talks in this book are surprisingly accessible — and Ford helps readers gear up with an introduction that includes a great basic AI/ML vocabulary list.

Among the marquee names on Ford’s interview list is inventor and futurist Ray Kurzweil, who is probably best-known as the author of “The Singularity is Near” (Penguin Books, September 2006) and “How to Create a Mind” (Penguin Books, August 2013). Kurzweil is currently director of Engineering at Google, but his long resume is, well, Wikipedia-worthy. (He also maintains the Accelerating Intelligence Web site that’s well worth a look.) Another is Andrew Ng, the co-founder of Coursera who also led the Google Brain Team. Also, there’s a conversation with Jeffrey Dean, Google senior fellow and current head of AI and Google Brain.

One of the things about this book that will make it stand out from the sky-high-and-growing stack of publications on this newly popular subject is that it demonstrates, with compelling conversations that, at least for now, there’s really no consensus among AI mavens about where these technologies are leading us and when we’ll get there.

“Their differences on some very important things was truly striking,” Ford said. “For example, the one question I asked everyone, of course, was ‘When will we achieve human-level AI.’ It’s really the most fascinating question of all, and the predictions ranged from Rodney Brooks’ (chairman of Rethink Robotics) estimate of nearly 200 years to Ray Kurzweil’s estimate of 11 years.”

“One thing they all agreed on to some extent,” Ford added, “is that AI is going to be tremendously disruptive. Everyone agreed that its potential impact on jobs and the economy is not overhyped, but very real. If you look at the improving dexterity of the robots in, for example, the Amazon warehouses. Within five years or so, those environments are probably going to be a lot less human-labor-intensive. For people who can learn these technologies, the opportunities are there. Some of those folks are making millions, but it’s rare that you can take a fast-food worker and turn him or her into a deep learning expert.” (Continues)